Published on December 10, 2018 by Christopher Smith   Share this on: 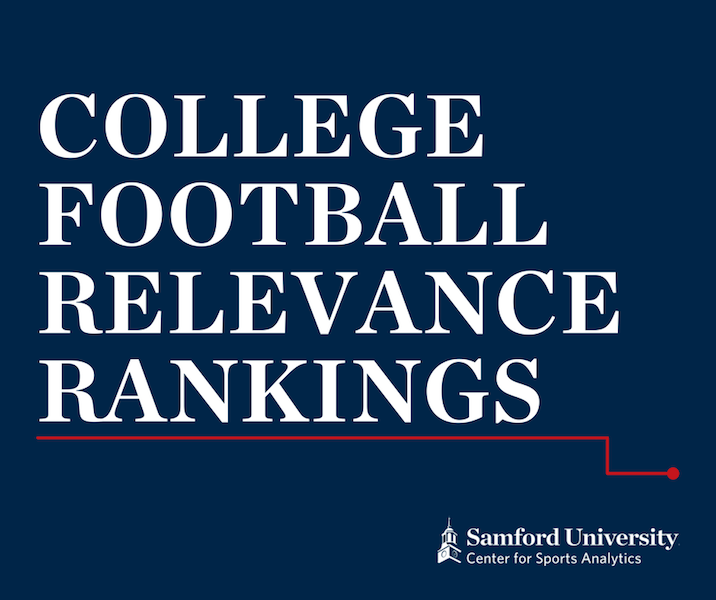 Winning and relevance are symbiotic partners in college football.

It’s a lesson University of Central Florida (UCF) fans have learned well in the last 13 months, as the Knights leveraged a 13-0 season to claim a national championship, pushing anti-establishment marketing even further on social media with a 12-0 regular season in 2018.

What has that historic stretch done for arguably the most capable Division I Football Bowl Subdivision (FBS) program that isn’t a Power 5 conference member?

You’ll need to turn to the second annual release of the Samford University Center for Sports Analytics College Football Relevance Rankings for an answer to that question and more. View the full rankings.

Based on social media data from 6.9 million U.S. sports fans, and developed in partnership with Affinio’s advanced machine-learning algorithms and unsupervised segmentation technology, the rankings offer a treasure trove of data on college football’s biggest programs, as well as the sport as a whole.

The relevance rankings capture a team’s significance to U.S. sports fans based on a relevance score, which this study has published for all Power 5 college football teams and select others.

Through this data set, Samford’s analysts surmised that UCF’s relevance score is 0.78, or tied for 25th nationally. That’s better than three SEC schools and tied with a fourth. It represents a 41.8 percent increase for the program in 12 months.

It also tells us that UCF was equally relevant to Nebraska as of November 2018. That’s fascinating because head coach Scott Frost parlayed his success at UCF in 2017 into the Nebraska job. Putting aside Frost’s personal connections to Nebraska and the higher salary, one could argue that the UCF job is just as significant in college football as of this moment.

College football also has faced questions about whether dominant programs like Alabama, Clemson, Oklahoma, Georgia and Ohio State controlling the college football playoff for a number of years is good for the game.

TV ratings when those teams play are one indicator, but so are the relevance rankings. Aggregating the data for Power 5 teams, we learn that their collective relevance has increased 11.9 percent year-over-year. In other words, the sport has blossomed with strong, relevant teams that foster reaction, positive or negative, among a large segment of U.S. sports fans.

It would be impossible to encapsulate all the conclusions and anecdotes made possible by the relevance rankings in one article. But Michigan (2.58 relevance score), which lost its regular-season finale at Ohio State to end its bid to play in this year’s College Football Playoffs, jumped Alabama (2.47) as the most relevant program in the country.

To no one’s surprise, the SEC is a dominant No. 1 in terms of relevance. The Big Ten is a distant second, while the ACC grew its relevance by a sport-best 20.1 percent, with 10 of its programs increasing relevance by at least 10 percent.

In the SEC only Auburn (1.13) and Missouri (0.45) declined in relevance this season. While Nick Saban might have once again won the big game against Kirby Smart, Georgia has significantly closed the gap in terms of relevance with a 38 percent increase since last season.

Vanderbilt leveraged their bowl-bound season to increase in relevance by 58 percent which ranks tops in the SEC for year-over-year growth. Kentucky’s historic season gave the wildcats a 24 percent increase.

Among programs with new coaches, Florida and Arkansas saw the greatest increase of 13 percent. And while Mississippi State might have won the Egg Bowl, Ole Miss (0.79) maintained their razor thin edge over Mississippi State (0.74).

The relevance rankings also indicate that it takes time to build a good score. Thus, consecutive successful seasons, drama surrounding coaching changes or a combination of both can hoist the relevance score of a school in a dramatic way.

Learn more about the Center for Sports Analytics.