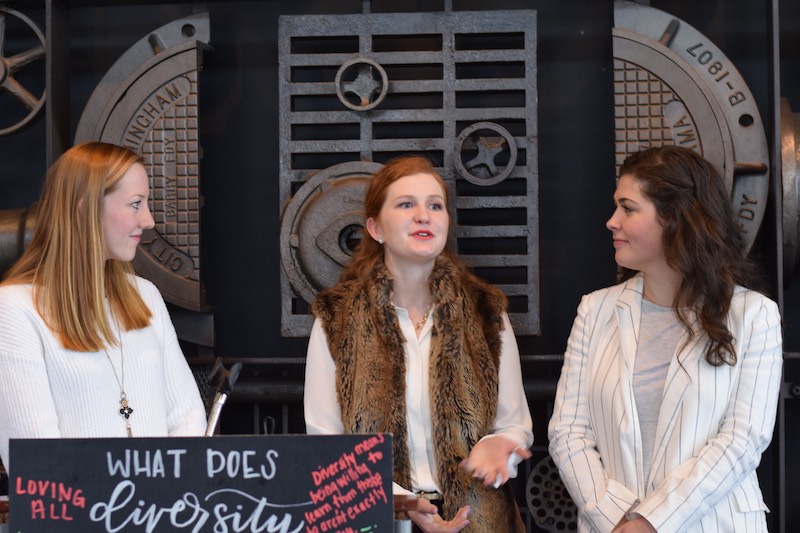 The members of a Samford University student-run public relations campaign have published a booklet focused on diversity and inclusion in the Birmingham communications workplace, and created a new scholarship to support those values at Samford.

Students Jack Biedermann, Ashley Hinson, Anne Davis Parks and Page Secreast organized the Voices of BHAM​ as part of the university’s annual participation in the national Bateman Competition. The launched the booklet at a March 7 event at Birmingham’s Vulcan Park and Museum as the culmination of the month-long campaign inspired by the Public Relations Society of America (PRSA) Foundation’s recent book ​Diverse Voices: Profiles in Leadership.

“We live in a city that has struggled with diversity in the past and sometimes is afraid to talk about it, so the ​Voices of BHAM​ booklet in conjunction with PRSA’s national book is important and needed,” said Samford public relations professor Betsy Emmons. “I hope that people will read the ​Diverse Voices​ book for the national perspective, and then read this booklet to see how Alabama communication leaders have had similar and sometimes different challenges.”

The booklet will be available for a suggested donation that will support the newly-created Samford PRSSA Diversity Fund. “This fund will serve to help those students who wish to be involved in our PRSSA chapter, but who might not have the initial opportunity to do so,” said team member Ashley Hinson. “Our hope is that with this fund, students can have better access to PRSSA events, such as meetings, professional development opportunities, and the national conference.”

“I am so thankful for the experience of learning more about diversity and inclusion in the communications industry,” team member Anne Davis Parks said of her work for the campaign. “This experience has opened my eyes and revealed blind spots in my life, and it makes me excited to go out into the workplace, be an advocate for diverse and inclusive teams and continue to learn.”