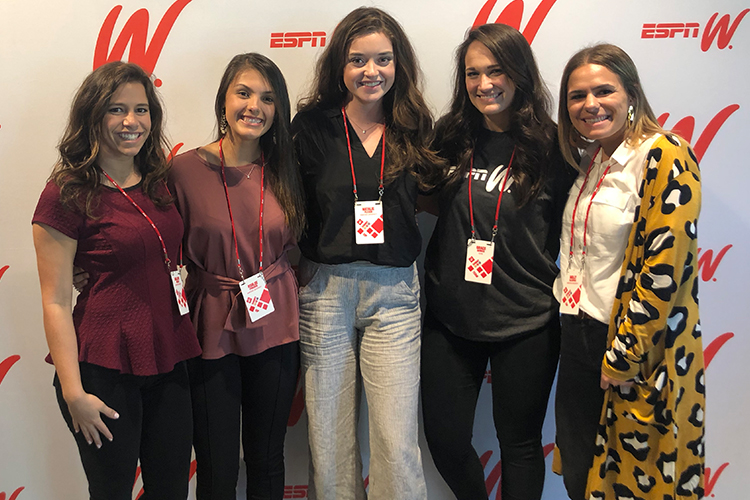 Women participating in Samford’s sports marketing concentration seized an opportunity of a lifetime at the end of the school year—the invitation to attend the ESPNW Summit in Brooklyn, New York.

The rare experience came from alumna Grace Bowes ’17, an associate manager in ESPN’s sports marketing and brand strategy division. On May 8, Molly Olsofka, Ashlee Fincher, Mallory Messer and Natalie Flexer represented Samford as one of only two sports marketing programs in the country invited to attend the one-day Summit.

The ESPNW Summit exists to unite professional women working in the sports industry, including business leaders, athletes and industry influencers, all focused on creating positive change, advancement and opportunity for women in sports. The event hosted numerous keynote speakers, panel discussions and small sessions in which the Samford students were able to participate.

“The main focus was on female empowerment,” Olsofka stated. “Not all of the speakers were in the sports industry, but they talked about women stepping up in whatever they do and showing that they are strong and just as capable as men in their profession.”

While at the conference, the students were able to network with some of the most recognized women in sports.

“Being able to attend this summit was an experience I will never forget. It helped me realize the progress that has been made for women in the sports industry, not only on the business side, but on the athletic side as well. I was inspired to continue advocating for women’s place in sports, especially on the business side.

It is opportunities like this that separate Samford’s sports marketing program from others,” Fincher said.

Jessica Mendoza, the first female MLB analyst for ESPN and former standout softball player from Stanford University and the U.S. softball team, was one of the speakers. During her book signing, she took time to visit with Samford students to answer any questions they had.

“It was awesome to meet her because her speech was such an inspiration as she talked about the risks she took to get where she is in her career,” Olsofka said. “She didn’t necessarily think she was qualified for her position with ESPN, but she went for it anyway. She did not let the criticism stop her or put her career on hold.”

“As we were going through the lunch line, Brandi Chastain came up to me and asked what I was eating and if it was any good,” Fincher said. “To say I was star struck would be an understatement.”

The favorite topic of the summit was conclusively the session with the 1999 World Cup champions.

“My love for soccer and growing up knowing the faces of these women made me geek out a little bit,” Messer said. “I loved hearing the behind-the-scenes stories and the feelings they felt during the game. They changed many people’s idea of women’s sports and some of the bad stigmatisms about them. They also discussed tactics for this current U.S. women’s national team and their World Cup journey coming up soon.”

After returning to Birmingham, the students reflected on their experience and the opportunities they are receiving through the sports marketing program.

“Anytime I am able to witness and be a part of women building each other up in this male-dominated industry, it serves as a reminder that the opportunities are virtually limitless,” Flexer added. “I have to thank professor Darin White [executive director of Center for Sports Analytics], Samford, Brock School of Business and the sports marketing program for opening up opportunities like the ESPNW Summit, and so many more, because it has forever changed my experience here at Samford, and I know it will have an impact on my life post-graduation.”