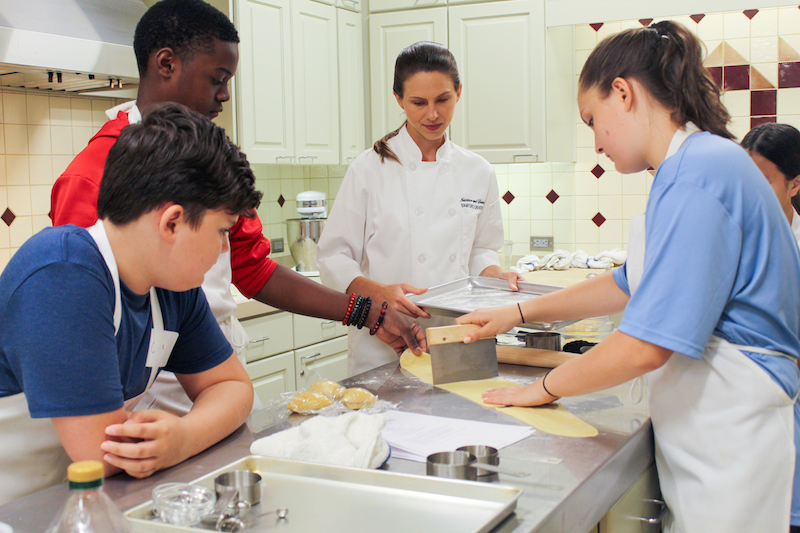 During Samford University’s first week-long Summer Cooking Camp for Teens, 15-year-old Mia Phillips tried a new food just about every day. “We’ve made a lot of different dishes this week. I really liked some, like carrot cupcakes,” Phillips said. “Some things I didn’t  - eggplant and tofu—but at least I tried it.”

Phillips was one of 16 attendees at the sold-out camp hosted by the School of Public Health’s Samford Wellness Kitchen.  The idea for the camp came from Sonthe Burge, a registered dietitian and instructor at Samford.  She worked with Pat Terry, professor in Samford’s Department of Nutrition and Dietetics and director of the Samford Wellness Kitchen, and Jessica Ivey, Birmingham chef and registered dietitian, to develop the camp program. Instructors also included two undergraduate nutrition and dietetic majors and a dietetic intern.

Over the five days of camp, attendees received a crash course in basic cooking, knife skills, portion control, the science of nutrients and how to shop for locally grown foods that are in-season.

“I was really surprised at how mature some of these kids’ palettes are,” Burge said. “They were very willing to try different foods and they could detect certain flavors and spices. Most everyone was eager to try new foods they had not tried before. They were eager to work together and explore in the kitchen.”

By the second day of camp, student chefs were learning how to make homemade pasta and perform cooking techniques like braising and blanching. Students worked in small teams at four different cooking stations to gain firsthand experience making everything from smoothies to roasted chicken and spanakopita, a savory Greek pastry. After hours working together in preparation, each class ended with a feast to sample the day’s work.

“Eating with a group teaches how important it is to come together and share a meal with other people,” Terry said. “This portion of class was a great moment of fellowship with everyone sharing what they learned in their kitchens, what they liked best and might cook at home and talking about what they looked forward to the next day. They also took food home to their families to show what they had achieved.”

At the end of camp, students received the full cookbook of recipes, an apron and a certificate of completion.

In addition to the new teen cooking camp, the Samford Wellness Kitchen offers year-round courses open to adults in the community. Courses in the fall include basic culinary nutrition and cooking for better blood sugar control.

“Through the Samford Wellness Kitchen, we want to give people experience in teaching kitchens that builds confidence in cooking techniques and helps them prepare delicious meals that lead to disease prevention and healthy eating,” Terry said.