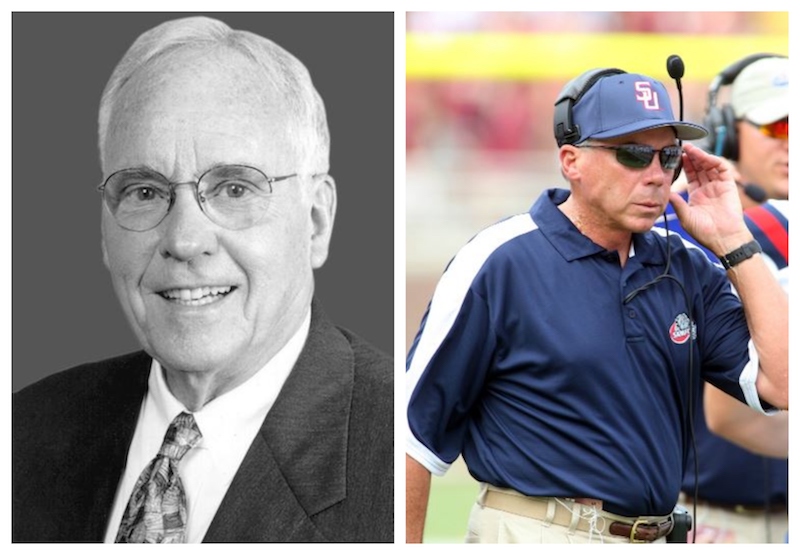 This week Samford mourns the loss of two cherished leaders, life trustee Boyd Christenberry and former head football coach Pat Sullivan, whose lives demonstrated the very best of the university’s core values. Both passed peacefully in their homes, Christenberry, on Nov. 28 at the age of 91, and Sullivan on Dec. 1 at the age of 69.

As steadfast supporters of Samford’s mission, both men contributed significantly to countless achievements in advancing the university’s goals during their professional careers and after retirement.

Christenberry, known for his long-time civic leadership in numerous organizations statewide, began serving on Samford’s board of trustees in 1978. Following his retirement, he went on to serve as chairman of the board from 1998 until 2002 and later as a life trustee.

“Mr. Christenberry’s association with Samford was deep, loving and profound and his positive influence will endure through the many Samford lives he touched,” said Samford President Andrew Westmoreland. “Like so many others, he came to appreciate Samford not as an alum, but as a person who grasped Samford’s historic and future value. Of course, we can’t think of him as separate from Mrs. Christenberry and the entire family and we are grateful to them, as well. We mourn the loss we feel so deeply, while celebrating the home-going of a person who was an exemplar for all who knew him.”

In 2005, Samford honored Christenberry with the dedication of the Boyd E. Christenberry Planetarium. The planetarium is the largest at a teaching institution in Alabama.

Learn more about the life and legacy of Boyd Christenberry.

Sullivan served as Samford’s head football coach for eight seasons from 2007-2014. As Samford football’s all-time winningest coach, he excelled at developing student-athletes and positively impacting the lives of his players. Sullivan served as special adviser to the president for campus and community development following his time as head coach.

In 2014, Samford renamed its football field house the Sullivan-Cooney Family Field House to honor the many ways Sullivan contributed to the university. The Samford Legacy League established the Jean and Pat Sullivan Scholarship in 2009.

"Pat Sullivan gave Samford all and more than we could have asked,” Westmoreland said. “His teams won games, his players persisted to earn degrees; by personal example, he led everyone closer to Christ and he brought honor to our university. Along the way, he became a close and cherished friend. We extend our support and sympathy to Jean and the Sullivan family and we remember Pat as making an extraordinary difference at Samford and in all other aspects of his life and career."

Learn more about the life and legacy of Pat Sullivan.

Both men will be remembered for their enduring impact on Samford University.