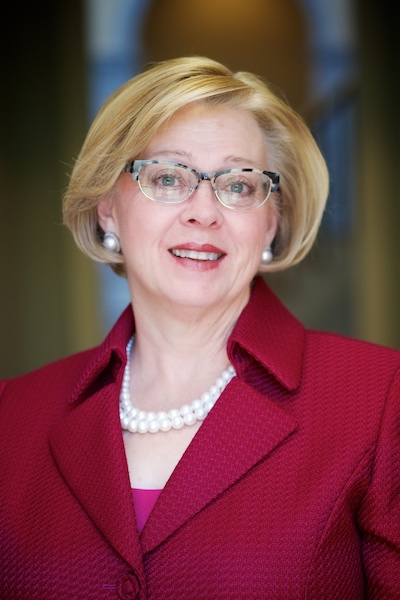 Nena F. Sanders, Ralph W. Beeson dean and professor of Samford University’s Ida Moffett School of Nursing and founding vice provost of the College of Health Sciences, has announced she will retire at the end of the 2019-20 academic year.

Creatively aligning her passion for transforming health care systems with the education and training of nurses, Sanders joined the Samford faculty in 1999. In 2001, she was named dean of Ida Moffett School of Nursing and in 2013 she was appointed the founding vice provost of Samford’s College of Health Sciences.

For Sanders, her decision to retire comes with bittersweet emotions. “It has been a joy beyond measure and a highlight of my professional and personal life to serve as dean of Samford’s Ida Moffett School of Nursing and establish the College of Health Sciences,” she said.

“This season of life has led me to reflect on the words of Ecclesiastes 3: ‘For everything, there is a season, and a time for every matter under heaven.’ In my life and throughout my career, I have experienced the ebb and flow of seasons. While it’s hard to know my time at Samford is ending, I am hopeful for the one to come,” she continued. “When I reflect on my 21 years at this university, I am overwhelmed with gratitude for the people and experiences that have impacted me so deeply.”

During her tenure at Samford, she has played a critical role in the development of the nursing school and its students. Under her leadership, the school has earned numerous rankings and recognitions, vastly expanded its degree programs, broken enrollment records and pioneered online education at Samford. In her initial year of teaching, she oversaw the school’s first grant submission. Today, the school has accumulated more than $20 million in grant and foundation funding.

As vice provost, she established the college’s foundation of interprofessional education, scholarship and practice, aligning Ida Moffett School of Nursing and McWhorter School of Pharmacy with the newly created School of Health Professions and School of Public Health. Today, the college consists of the Center for Faith and Health; an accredited experiential learning center, one of only two accredited in the state; and 30 innovative degree programs, 22 of which were developed under Sanders’ leadership. Sanders also provided visionary leadership and oversight of the 223,000-square-foot renovation of the current College of Health Sciences facilities, including 80,000 square feet of total demolition and rebuilding.

“Dr. Sanders has earned a reputation far beyond our university and our state for her exemplary career in nursing as a practitioner, scholar and health care administrator,” said Samford President Andrew Westmoreland. “Her leadership in the nursing school and in the formation of the College of Health Sciences has been truly transformational in Samford’s history. Decades from now, her work here will continue to benefit students and faculty here and impact the quality of health care delivered across the world.”

In addition to her service to Samford, Sanders serves as board chairperson for Ascension Alabama. She is one of few chairpersons with a nursing background to be selected for a position of this caliber.

Throughout her nearly 40-year career as a nurse, entrepreneur, educator, administrator and health care consultant, Sanders has improved the delivery of health care from multiple fronts.

Before coming to Samford, Sanders was the founding president and chief executive officer of Strategic Dynamics, a widely successful consulting practice that served health care organizations across the nation. Her early work with Humana, Inc. resulted in the implementation of a progressive nursing practice model adopted nationwide by more than 200 hospitals. The groundbreaking model expanded the role of the advanced practice nurse and hallmarked the interdisciplinary approach for patient care delivery. Additionally, as project director for, “Cost Management Education for Nurses Contract,” a study funded by the U.S. Department of Health and Human Services, Sanders published outcome data that served as a foundation for educational programs nationwide. Continually, her innovations expanded health care systems and improved patient outcomes, while reducing cost.

Her multifaceted and transformative career has earned her a number of national and international recognitions. Some of her highest recognitions include: Distinguished Fellow for the National Academies of Practice, Fellow of the American Academy of Nursing, and member of the Alabama Healthcare Hall of Fame and the Alabama Nursing Hall of Fame. She is a recipient of the Momentum Women of Impact Award and the Visionary Leader Award from the University of Alabama at Birmingham School of Nursing.

Sanders’ leadership and guidance has paved the way for numerous health care providers to enter the workforce prepared to excel within their specialty as collaborative practitioners. Her legacy is one that is woven deeply with threads that unite Samford with the greater health care community, and her impact is one that will remain as a cornerstone of the entities she has led and inspired.

A national search will be conducted for the next Ida Moffett School of Nursing dean. Michael A. Crouch, Fred E. McWhorter dean and professor of the McWhorter School of Pharmacy, has been appointed associate­ provost of the College of Health Sciences effective June 2020.