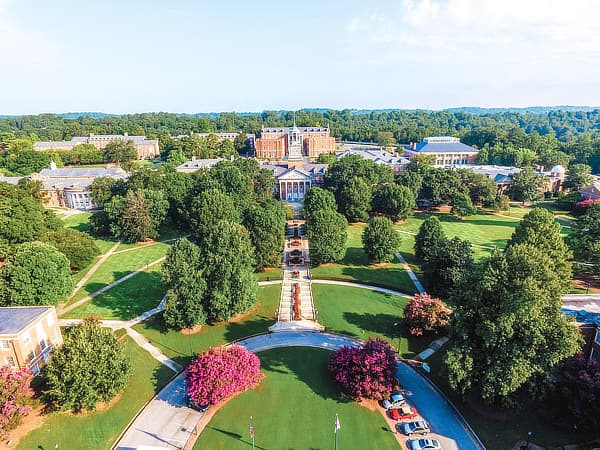 Samford University is among the best universities in the nation for financial aid assistance, according to a report published by student loan refinancing service LendEDU.

The analysis, which ranks Samford 32nd in the nation and 1st in Alabama, affirms the university's longstanding commitment to providing high-quality education that is affordable and attainable for students. Considering there are 4,300 degree-granting postsecondary institutions in the U.S. recognized by the Department of Education, this analysis places Samford among the top national universities in the country.

"With finances tight amid much uncertainty these days, both students and parents are now seriously considering what kind of financial aid package a school can offer, which makes this data extremely valuable since Samford University has a history of generous financial aid offerings," said LendEDU representatives.

Samford is regularly recognized as one of the leading Christian universities in the United States and receives high marks for both quality and value. Earlier this year, LendEDU recognized Samford for its return on investment to students and its low student loan default rate. Additionally, U.S. News & World Report ranked Samford 86th in the nation and 1st in Alabama in its 2021 ranking of the Best Value Universities. It is the only Alabama university included in the list. U.S. News & World Report also recognized Samford in its list of Least Debt National Universities, which highlights schools whose graduates have the lowest average debt, as measured by graduates' mean federal loan indebtedness.

"We are proud that our financial aid packages reflect our commitment to expanding affordability and access to education for our students through a variety of options," said Lane Smith, Samford's director of Student Financial Services. "Helping students prepare for financial success demonstrates one of the many ways students benefit from Samford immediately upon graduation."