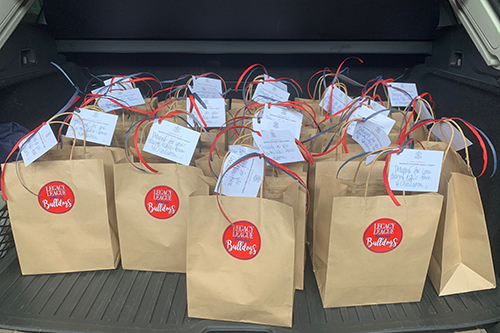 In a year when students were asked to isolate or quarantine because of COVID-19, the Samford University community, including volunteers and groups on campus, worked to ensure students did not feel alone.

In a collective effort, nearly 500 care packages were sent out during the fall semester through a highly coordinated process. Homemade cookies and brownies, bags of microwave popcorn, granola bars, candy, mints, fresh fruit, water and Gatorade were among the items delivered. And each package included a hand-written note of encouragement.

The driveway and front porch of the President’s Home became the operation center for Legacy League volunteers. Each Wednesday, items were dropped off to be delivered to students the following day, and volunteers who assembled the packages observed proper protocols.

Some volunteers contributed items nearly every week, while others helped as they were able. “When Samford was making the decision to come back to campus and how to handle students who would be quarantined, my heart was broken with the thought of a student who would be isolated with no family near them. I knew I wanted to show my support,” said alumna and Legacy League member Alissa Hyde ’93, ’98.

Samford Parent and Family Programs contributed to these efforts as well, and grateful parents took notice. “From meals to mail, treats in the room, great communication with faculty and staff, and a lovely care package, [my daughter] had such great support from her school community,” said one mother. “It all felt very generous to her.”

For the individuals who contributed, this was a meaningful way to serve the Samford community at large, and these efforts will continue this spring and as long as there are students in need.