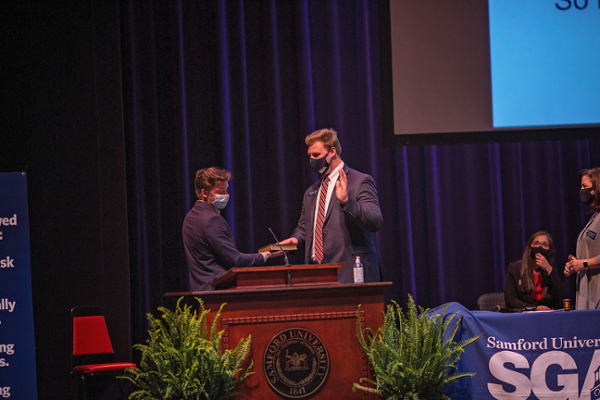 The new student body president, along with members of his cabinet, were sworn in Wednesday, April 21, during Samford University’s annual Student Government Association Inaugural Ceremony. Members of the 2020-2021 Student Executive Board were also honored.

Tyler Kendall, the new SGA president and a senior majoring in communications studies, assumed the role from Hope Dawson, who had served as president since last April.

Kendall says he is excited to give back to the Samford community.

“Samford has given me so much and I am so grateful for the impact it has had on my life. I want to be able to do the same and give back to the university that has truly changed my life,” Kendall said. “I am also excited to be able to engage in the Samford community with my fellow peers as well as faculty and administrators.”

Dawson, who will graduate in May, says serving during the COVID-19 pandemic was a challenge, but also an opportunity to learn and grow.

“Samford has helped develop me into the person I am today, so it was an honor to give back to the school that has given me so much. This year has been like no other. There were lots of challenges, but also lots of successes,” Dawson said. “We learned how to stay steady and Christ-centered amid a storm while also being creative and thinking out of the box. It was more than expected, but I would not have changed a thing.”

President Andrew Westmoreland provided the benediction and President-elect Beck A. Taylor provided a video message where he called on SGA members to support members of the upcoming freshmen and sophomore classes by helping them find a sense of normality once they arrive on campus in the fall. This is a call that Kendall agrees with and plans to answer.

“One priority that we as SGA are going to be working on is engaging the Samford community back into campus life.,” Kendall said. “This past year was truly a year like no other and I know that there are some students who didn’t really get the Samford experience, so by working with administrators and students across campus, it is our goal to create an atmosphere where students can feel included and engaged within campus,” Kendall said.

For more information about the SGA, visit its website.