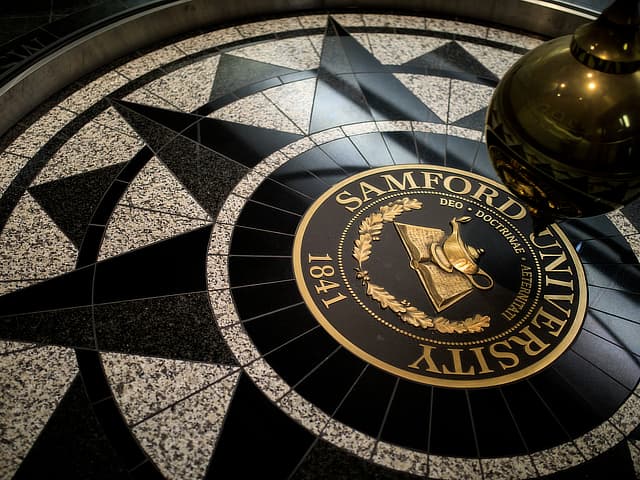 Samford University’s Board of Trustees welcomed five new trustees,  authorized a bond issue of up to $65 million, and approved new faculty appointments, the fiscal 2020-2021 audit and the naming of two athletic facilities at its fall meeting on Sept. 10.

Trustees approved a resolution to authorize financing and refinancing of capital improvements and the issuance of up to $65 million in revenue bonds. Approximately $23 million will be allocated and applied to capital improvements related to the university’s campus master plan, and approximately $42 million will be allocated to the payment, redemption and retirement of outstanding debt. On Oct. 14, 2021, Moody’s Investors Service reaffirmed the university’s investment grade bond rating of A-3 stable.

Ten new faculty members were approved in School of the Arts, Howard College of Arts and Sciences, the School of Health Professions, Moffett and Sanders School of Nursing and the School of Public Health. Trustees also approved the renaming of three campus initiatives, including the Faculty Success Center, The Writing Center and the Center for Women in Ministry.

Phil Kimrey, Samford's vice president for student affairs and enrollment management, reported on fall enrollment across the university’s undergraduate and graduate programs. He anticipated the university would soon announce its 13th consecutive year of enrollment growth.  Trustees also received an update on the work of the university’s Task Force on Racial Justice, which was established in June 2020 to advance the university’s commitment to promote and support racial diversity across campus.

Trustees were advised that the university’s endowment fund was approximately $357.28 million as of June 30, 2021. A detailed update on the campus master plan and current renovation projects was provided, and a resolution authorizing financing for forthcoming capital improvements planned was adopted.

Two athletic spaces were named in honor of impactful former members of the university community. The soccer field in the Samford Track and Soccer Stadium will be named Shauna Yelton Field in honor of the beloved former Director of University Health Services and the late wife of Samford’s head soccer coach, Todd Yelton, who lost her battle to cervical cancer in November of 2015.

The board also named the Track and Soccer Stadium in honor of Cameron Bean, an award-winning member of Samford’s track & field and cross country teams from 2005-2010. Bean died in 2015 when he was struck by a motorist while on an evening run in Chattanooga, Tennessee. He was inducted into the Samford Athletics Hall of Fame in 2019.

The university’s Nondiscrimination Statement and its Mission, Vision and Core Values statements were reaffirmed and approved by the board.