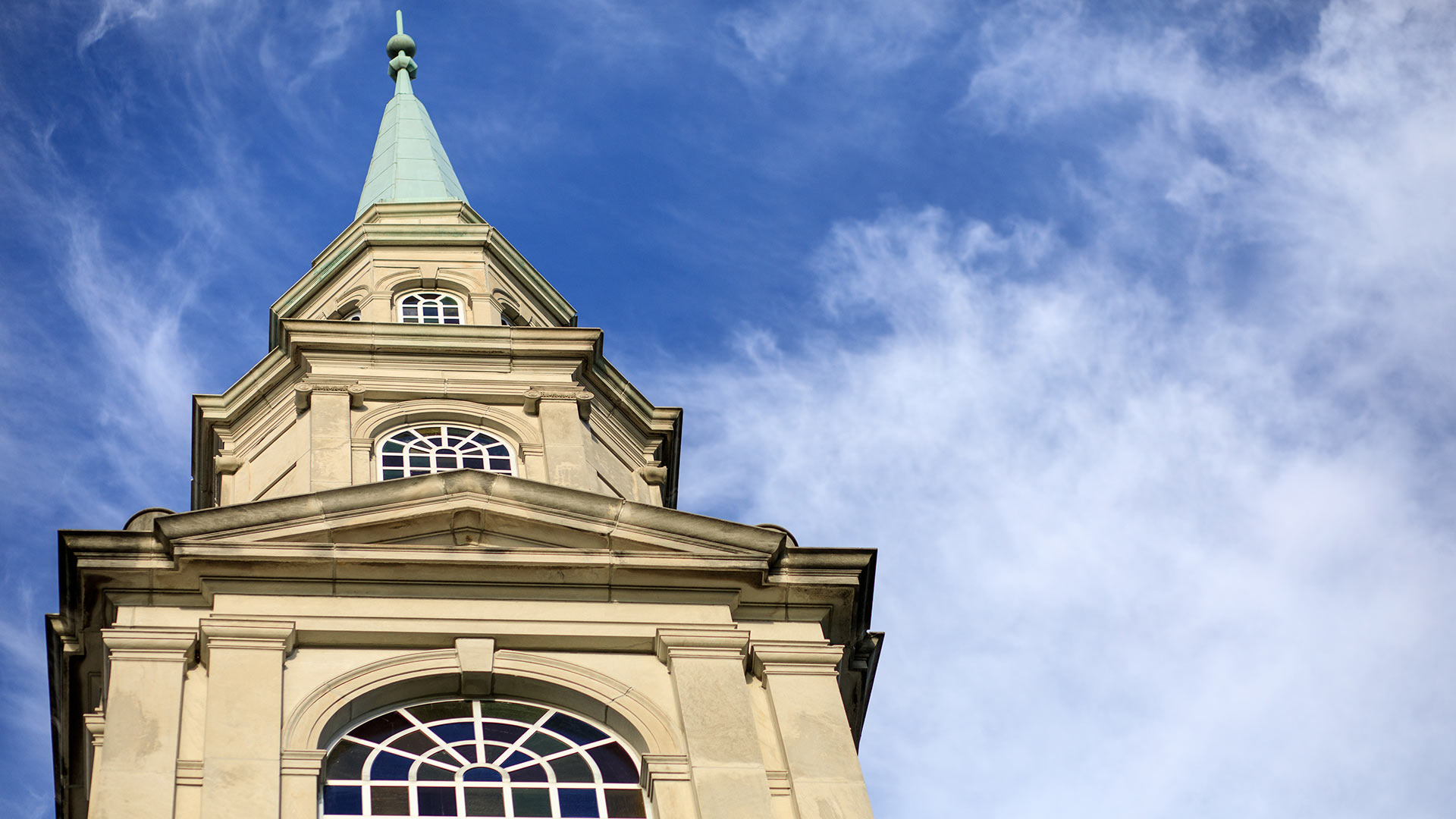 The Center for Science and Religion at Samford University is engaging with churches and congregations about the big questions of science and religion through a variety of activities.

A joint proposal between the Samford University Center for Science and Religion and Dawson Memorial Baptist Church resulted in receipt of a Scientists in Congregations grant (funded by the John Templeton Foundation) to provide the Dawson congregation with opportunities to engage big questions of science and religion through a variety of activities. The effort at Dawson was the prelude to a conference to  help leadership and members from other congregations explore science and religion issues with the hope that they would be better motivated and equipped to implement similar programs in their respective churches. As part of the grant, the Center for Science and Religion produced a set of web-based materials that can be used by churches and other interested parties to foster education and dialogue on several critical issues. Primary grant activities were conducted between September, 2011 and February, 2013.

Science has provided a picture of the world that is in many respects radically different from the one that people had during the period of time in which the Bible was written. This has led to the appearance of several supposed problems:

The goals of this project were to equip members at Dawson and other churches to:

Pursuit of truth is an essential part of Christian responsibility and activities such as those undertaken in this project are important components in that endeavor. Use of this approach to further engage the church in the intellectual life of its members and prospects is thus an important means of supporting its overall mission to save the mind as well as the soul.

“But in your hearts revere Christ as Lord. Always be prepared to give an answer to everyone who asks you to give the reason for the hope that you have. But do this with gentleness and respect…” (I Peter 3:15)

Grant activities were formally launched during the fall of 2011 with a ten week seminar series on big questions in science and religion. This series was offered on Wednesday evenings as part of Dawson’s regular weekly programming and followed a comparable series of well-received presentations made at a local Presbyterian church a year earlier. The intention in this series was to show what science provides in the way of insight into the big questions of meaning and value and to help participants think deeply about the relationship between scientific understanding and their own religious faith. Sessions included:

One of the key factors enabling or inhibiting science and religion dialogue is the approach one takes to Biblical interpretation. Dr. Todd Harrington led this series during the spring of 2012.

During the spring of 2012, Dr. Steve Donaldson led a series on evolution. Topics for these Wednesday evening programs for adults were:

Educational: Darwin’s theory of evolution raises a number of interesting and significant issues. Attendees were expected to gain significant insight into those issues, resulting in more informed individuals who know what the theory of evolution does and does not say, who know why almost all scientists accept it without reservation (whether they themselves do or not), and who understand the implications of the issues raised by the theory for religion in general and Christianity in particular (and know some possible responses).

Critical Thinking: Key goals of this seminar were to help attendees engage in critical thinking about both the meaning of evolution and their own personal assumptions (whatever those may have been) and to help equip them to examine and evaluate the various Christian responses to evolution. It was considered very important that individuals have the chance to see that it is neither a Biblical nor a scientific mandate that they believe it is “evolution or the Bible” but to consider that both might have something important to say. Overall, the series was designed to help attendees cultivate a richer, deeper engagement between scientific and religious perspectives.

Outreach: Seminars such as this have the potential (both directly and through subsequent encounters) to foster relationships with those outside the church who perceive Christian beliefs as scientifically naïve. The hope is that we members can become capable of engaging in open, constructive dialogue with such individuals and that doing so will open doors that allow them to get a glimpse of the fundamental message of Christianity without being side-tracked by extraneous concerns.

Spiritual Growth: If there is a God and if evolution as a theory is true, then there must be a relation between the two. Consequently, attendees were afforded the chance not only to obtain a more accurate view of science but to acquire a bigger view of God. The idea that a deeper understanding of the universe and how it works can contribute to both personal and congregational spiritual development is exciting. This had (and has) the potential to be another step toward making the mind a full partner with the heart, soul, and strength with respect to loving and serving God.

Graduating high school students often leave the confines of their church and go off to college or the job market where they discover that there are issues from which they have been isolated. Some of these issues can rock their religious faith (and some probably should) but that is frequently because the students have been given little background to prepare them for such a confrontation and many times the people who expose them to such issues have little concern for the student’s spiritual development. Many of the issues are directly related to topics at the interface of science and religion.

During the spring of 2012, Dr. Steve Donaldson led a four week series on Big Questions in Science and Religion for high school students at Dawson Memorial. Sessions included:

We currently have the best possible understanding of the Bible and science.
The Bible must be interpreted in a certain way.
The Bible is an authority in every arena of human inquiry.
Changing our views on even one issue is just too risky.
God is not really omnipotent.
As science grows, God shrinks.
People want to know the truth.

The answers to four key questions can open or shut the door to understanding the relationship between science and religion. These are:
Must I be bound to one way of reading the Bible?
Are my assumptions valid?
Am I interested in the truth (or in just defending my current position no matter what)?
How big is God?

No student should leave high school without an understanding of the key issues surrounding the theory of evolution and how they relate to Christian faith. Premises for this session included:
Despite scientific evidence for the theory of evolution, there is no requirement that someone believe it.
However, evidence should not be avoided just because it seems inconvenient.
Neither should one fabricate implausible scenarios to justify pre-existing biases.
Fortunately, a person can be a Christian and accept evolution.
And, when people say that is impossible, it is probably because they have too small a view of God.
In any case, this is not the central point of Christianity!

Faith is ridiculed by the irreligious as scientifically deficient, rationally infirm, and only manifest by the naïve. On the other hand it is regarded by the religious as a necessary evil, a poor excuse for knowing, and something people (and especially Christians) will, eventually, not need. Both views misunderstand the nature and role of faith which is the inevitable product of human brains and impossible to escape.

Science, Religion, and the Church Conference

Perceived incompatibilities between theological and scientific perspectives of the world pose a potential dilemma for Christians and form a barrier for many outside the church for whom Christianity might otherwise appear viable. If the church is to maintain its relevance without sacrificing its core values, however, it cannot ignore these issues.

On October 20, 2012, a free one-day conference provided the chance for church leader and members of all denominations to hear about a variety of topics with the hopes that they would consider engaging their own congregations in science and religion dialogue as a means to

The conference was attended by members and/or staff from twenty different churches in three states. Keynote speaker and noted author Karl Giberson kicked off the event with a talk entitled “Is Science at War with Christianity?” Other presentations included:

A portion of grant funds was used to purchase a selection of books on science and religion for church libraries. The books offered were chosen to be representative of a variety of science and religion topics including general perspectives, mind/brain, transhumanism, evolution, randomness and purpose, and interpretation. Titles included:

Initial offers for the free books were made to those churches which had someone from their membership in attendance at the Science, Religion, and the Church Conference held in the fall of 2012. The offer was then extended to a number of other churches. Churches receiving books include:

Reading Groups in Science and Religion

Part of the mission of the Samford University Center for Science and Religion is to be a resource for ongoing support for congregations attempting to engage in science and religion dialogue. The Center provides a stable point of contact and serves as a network hub that can effectively leverage the efforts of ministers and lay scientists at interested churches.