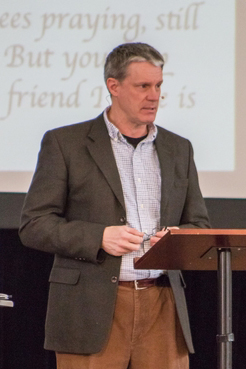 Enns is Abram S. Clemens Professor of Biblical Studies at Eastern University, and the author of many books, including The Sin of Certainty: Why God Desires Our Trust More Than Our “Correct” Beliefs. In his address in university convocation Feb. 25, Enns explored the theme of that book, illustrated with the Biblical passages alternately called the Psalms of lament, or complaint or petition.

“Something has happened to the writers of these Psalms, and they don’t hesitate to question God, to interrogate God, to call into question God’s trustworthiness,” Enns said. Although these parts of the Bible might not get much attention in church, Enns considers them “gifts” and said Christians “shouldn’t be shielded from what they have to say to us.”

What they have to say to us, Enns said, is that in the midst of suffering, catastrophe and everyday challenges, even the most devout believers can feel abandoned and hopeless. “For us, they signal not only what can happen in a life of faith, but what in fact does happen, what we should expect to happen.” Most importantly, Enns said, these Psalms suggest a way for believers to express their grief when certainty flees. “They model something for us about the value of simply being honest with God.”

Enns said many Christians simply “stuff it,” hiding their shame from other believers when they have the kinds of feelings expressed in the Psalms. “You’re not broken if you feel that way,” Enns assured his audience. “You don’t need to be fixed. You’re actually pretty much in the normal range, when it comes to the Christian faith.” He said the Bible holds many places to go when believers feel abandoned, but his own favorite places are the challenging Psalms 73–89, where he finds not only reassurance and praise of God, but also “bracingly honest and unsettling” words about losing one’s grip on faith in God.

Psalm 73 expresses frustration at the suffering of the righteous while the wicked prosper, against God’s promise.

The prayerful but suffering author of Psalm 88 lists and praises God’s promises to his people but then laments that “the only friend I have is darkness.”

The author of Psalm 89 praises God’s faithfulness and promises for his people, then cries in despair, “How long, oh Lord? Will you hide yourself forever?”

Enns said the Psalmists, like many believers at some point in their lives, feel that they can neither express their doubts publicly nor hold them inside. But instead of pretending and hoping their doubts will fade, they “enter the sanctuary of God,” and simply tell the truth, as one must in any healthy relationship.

“Grumbling and murmuring might be judged by God, but not this honest, heartfelt expression of ‘God, where are you?’” Enns said. “Let’s not forget that the Gospels tell us that Jesus himself expressed the experience of God’s abandonment on the cross, and he used a ready and waiting Psalm (Psalm 22) to express his feelings — “my God, my God, why have you forsaken me?’”

“Feeling like God is far away, disinterested or dead is woven into the Biblical fabric and can’t be brushed aside,” Enns said. But, he observed that although some of these Psalms end without resolution, the last of them, Psalm 89, includes the “very intentional ending of ‘Blessed be the Lord, forever, Amen, Amen.’ Even in suffering, the Psalmist moves toward trusting God anyway, when all the evidence is against him,” Enns said. “I think that’s the real way forward.

“Losing our sense of certainty is part of the journey of faith,” Enns concluded, “and is not a sign that our journey has come to an end.”