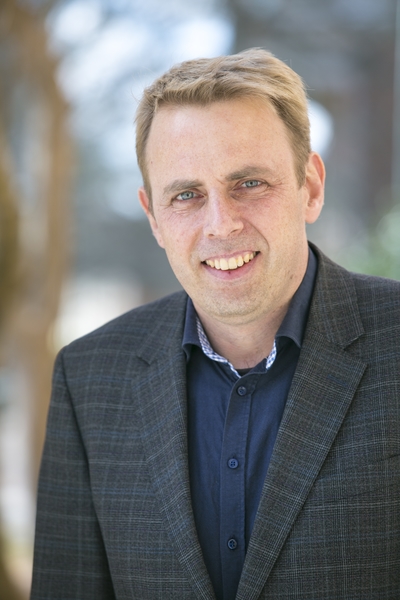 Samford University’s English Department is hosting Danish Fulbright Scholar Anders Holm through the end of July. Holm, an accomplished scholar of culture, literature, and church and intellectual history, serves on the faculty of theology at the University of Copenhagen. He said Birmingham holds special appeal for him because of its Civil Rights history, rich church culture and the many Samford scholars who can discuss his research projects.

Holm knew of Samford via his friendship with English Department chair Brad Busbee, who held a Fulbright Fellowship to Denmark in 2003–04. Holm and Busbee also coedit Grundtvig-Studier: An International Journal for the Study of Nicolai Frederik Severin Grudtvig (1783–1872).

Holm said Grundtvig was, among many other things, one of the first scholars to create a modern translation of Beowulf, a topic of scholarly interest to Busbee. Grundtvig also was one of the constitutional fathers of Denmark and a proponent of the folk high school, an educational system intended to help all citizens participate in democracy. As a secondary project while in the United States, Holm hopes to explore how Grundtvig’s ideas might have influenced similar schools here and what role those schools played in the Civil Rights Movement.

Holm is primarily interested in studying the relationship between religion and politics in the U.S. “I’ve been interested in the American model, and how the constitution defines the relationship between state and church,” he said. “This is, to me, very interesting because in Denmark we have something resembling a state church.” Holm said in his country, the church has helped drive state social services, a topic he will explore in a presentation on “The Reformation and the Nordic Welfare State” in a public lecture this month. That talk, part of Samford’s Core Texts Lecture Series, will begin at 3 p.m. March 16 in Reid Chapel.