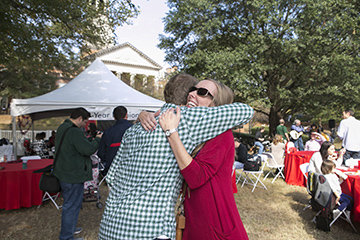 The Samford University campus was in an especially festive spirit as the school celebrated its 175th anniversary during 2016 homecoming weekend Nov. 11–12.

On Saturday, the quadrangle was busy with people tailgating and enjoying walking history tours that highlighted pivotal moments in school history. Early in the day, the Class of 1961 reminisced at a reunion breakfast, and many alumni and guests took in open houses and brunches hosted by greek life.

A morning highlight was the journalism and mass communication Wall of Fame ceremony that honored JMC graduate and longtime Samford public relations head William A. Nunnelley.

Throughout the day, alumni and guests took advantage of the sunny, crisp fall weather to mingle, eat and relax all across campus.

“He’s cute and fat,” Fritz said. Mother and son were waiting to watch the football team make its way to the stadium for the afternoon game. Happily, the Samford Bulldogs defeated the Mercer Bears, 24-19.

At the game, it was announced that the classes celebrating reunions this year had raised more than $38,000 in scholarship funds as part of their reunion activities. Representatives from the classes of 1961, 1966, 1991 and 2006 presented a symbolic check to Samford President Andrew Westmoreland and W. Randy Pittman, vice president for advancement.

JMC 1992 graduate and former Samford Bulldog Brian James and his wife, Corie, sat under the Samford athletics tent watching as their sons, Brenton and Braylon, tossed a football nearby. It was the youngsters’ first visit to a Samford homecoming, said their dad, whose senior homecoming game in 1991 was particularly memorable.

The game with Troy University was about over, and Samford was losing by a few points, James recalled. “With 20 seconds left, I caught the winning touchdown pass,” said James, who lives in his hometown of St. Augustine, Florida.

Class of 1991 classmates Deena Haynes Weston of Montgomery, Alabama, and Kari Brown Ingram of Hoover, Alabama, reminisced at the 25-year reunion tent. The two Chi Omega sorority sisters, who lived in the now demolished A-B dorm “under the hill,” were visiting for the first time since their last chapter meeting 25 years ago.

Cheryl Smith Hinnen was back for her 10-year class reunion. “It’s important to come out and reconnect with friends,” said Hinnen, who enjoyed introducing her husband, Jack, to people he had not met. They attended without their 2-year-old daughter and 3-day-old son, who were being cared for at the couple’s nearby Homewood home.

Hinnen’s classmate Liz Simmons traveled a bit farther for homecoming. The London, England, resident was on the Class of 2006 reunion planning committee and felt it important to attend. “We had a really good community and class, and it is good to see the relationships continue,” Simmons said.

“A reunion of friends” was how one graduate described the amiable group sitting on grass near the center of the quadrangle. “We’re just catching up, enjoying the tailgating and barbecue,” explained Chris Robbins of Birmingham. He and his wife, Erin Cheek Robbins, are both 1998 education graduates.

Some of Samford’s newest graduates from the Class of 2011, including public administration major Daniel Lentz of Atlanta, Georgia, found their way to homecoming.

“I especially wanted to come because it was celebrating Samford’s 175th anniversary,” said Lentz, who also wanted to reconnect with classmates and possibly make business connections with older graduates.

Lentz was among several thousand students, alumni and guests who attended the Friday night Anniversary Ball in the festively decorated Pete Hanna Center. At intermission, the dancing stopped for introduction of the Alumni of the Year honorees, the homecoming court and queen and king, seniors Margaret Hehir and Micah Green-Holloway.

Friday’s events also included department open houses, an Alumni Association meeting, a luncheon for graduates of classes 1966 and earlier, and a festival procession and convocation that allowed the Samford community to celebrate its 175th anniversary in fellowship and worship.

Homecoming activity began earlier in the week with a series of special student-centered events.

“We wanted to celebrate what we are and what makes Samford special,” said Bragg. “We wanted to highlight different organizations and groups on campus, and include everyone.”

Dykes noted the importance of the occasion because of the anniversary. “This homecoming is really big, and we wanted to celebrate not only the past Samford, but where we are now and where we are going.”

Throughout the week, many clubs and organizations creatively decorated display boards on Ben Brown Plaza. Winners were announced at the football game on Saturday.

Homecoming weekend activities also included Saturday event reunions for the classes of 1991 and 1966.