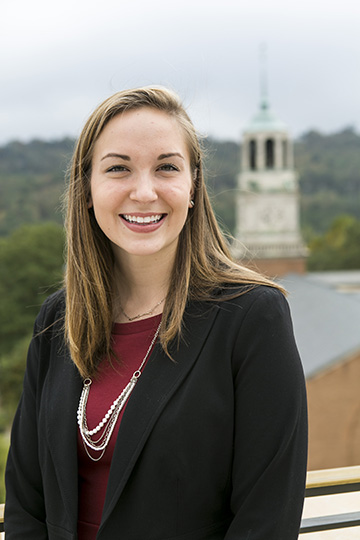 From hiking the mountains of New Zealand to following in the footsteps of Jesus in Israel, Samford University senior Emily Ehrnschwender has defined her college experience by taking any opportunity to travel that comes her way.

Ehrnschwender, who plans on pursuing a career in data analytics after studying economics, mathematics and statistics in the Brock Scholars program, sees each of her travel experiences as an opportunity to grow and learn. Brock Scholars is the honors program in Samford’s Brock School of Business.

“Through the experiences I’ve had with the Brock Scholars program, I’ve learned that any experience outside your comfort zone helps you to grow,” said Ehrnschwender. “What Brock Scholars offers students is the chance for them to push themselves outside their comfort zones on a regular basis.”

When Ehrnschwender moved to New Zealand for the spring semester of her junior year, she had no idea what to expect. While there, she took courses in modeling and regression, behavioral economics and computer programming.

“I moved to a country where I didn’t know a single person, without any guidance, and I was able to make friends and become accustomed to the school and culture,” said Ehrnschwender. “New Zealand was appealing to me because it was English speaking, offered statistics and economics courses beyond what is offered at Samford and, of course, all the outdoor adventures available in such a beautiful country.”

New Zealand was not Ehrnschwender’s first experience traveling internationally. She spent the summers after her freshman and sophomore years interning on Eleuthera Island in the Bahamas with Bahamas Methodist Habitat, a construction-based disaster relief program. Through this opportunity, she learned nonprofit management skills by coordinating activities and logistics for more than 400 volunteers each summer.

“My leadership skills grew tremendously throughout that experience and, most importantly, my confidence in my leadership grew,” said Ehrnschwender.

Brock School of Business has given her opportunities to travel within America as well. Ehrnschwender was part of the group that traveled to Omaha, Nebraska, last fall for a question-and-answer session with Warren Buffet. She also traveled to Boston the summer after her sophomore year to participate in a National Association of Business Economics conference on the intersection of big data and economics.

“Each aspect of this program has been invaluable—the ability to design your own curriculum, the close relationships with professors and the funding for extracurricular learning activities,” said Ehrnschwender. “I now have an exciting job and career to look forward to as a result of all that I have learned and the connections made through the program.”

Ehrnschwender has accepted a full-time position after graduation as a strategy consultant for StrategyWise in Birmingham, where she has worked as an intern writing and researching, as well as assisting with overall business strategy development.

“Over the past eight months, I primarily worked with them on a project for a corporate grant-giving foundation. We reworked their data collection system in order to gain a more granular understanding of the foundation’s charitable impact to the community,” said Ehrnschwender. “I am currently writing a case study on this project for my Brock Scholar’s senior thesis.”

Most recently, Ehrnschwender spent Jan Term studying in Israel with Samford, touring the places where Jesus lived and taught, and gaining an understanding of the political happenings in Israel and the Middle East.

“I didn’t receive class credit because I didn’t need any, but the trip was a wonderful, fulfilling experience that has changed how I read and study the Bible in so many ways,” said Ehrnschwender. “I was thankful that the Brock Scholars program made the trip possible for me.”

Through every travel opportunity, both nationally and internationally, Ehrnschwender has pushed and challenged herself in ways she did not know she could.

“It certainly wasn’t easy, but by throwing myself in deep, I was able to grow in a way that I wouldn’t trade for anything,” said Ehrnschwender. “I wish more students at Samford had the opportunity to jump as far out of their comfort zone as I was able to.”