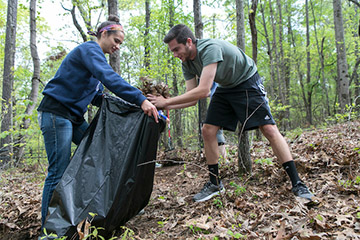 Volunteer Initiatives Are Integrated into Academic and Student Life

Samford University’s undergraduate and graduate students demonstrated a 29 percent increase in the time they spent learning and working off-campus in local, regional and global communities during the 2015–16 academic year according to the latest Community Engagement and Impact Report compiled annually by the university’s Frances Marlin Mann Center for Ethics and Leadership.

“Community engagement is simply part of the university’s DNA,” said Mann Center director Drayton Nabers. “The experiences of students when engaged in community work will stay with them for a lifetime.”

An initial annual report three years ago provided a well-rounded narrative and overview of the off-campus involvement of Samford students. While still quantifying students’ cocurricular and curricular community work, the 2015–16 report contains additional information from the university’s 10 schools, colleges and multiple campus units that more fully reflects the mutual benefit of community engagement for both students and communities.

“Measuring impact can be difficult,” Nanni admitted. “Our hope is that the findings drive our day-to-day decisions. We want to leverage Samford’s human and financial resources to maximize benefit both for our students and for the citizens living in the broader region and around the world.”

The total value of Samford students’ 927,192 community engagement hours was $21.4 million, based on the estimated value of volunteer time according to Independent Sector. Samford’s overall economic impact on the region is $335 million. The totals included 608,584 academic service hours tied directly to classes and an additional 318,609 service hours through cocurricular activities. Neither Samford nor its students received any reimbursement for these services.

With more than 295 courses that integrated community engagement as an academic component, Nanni said the university worked with hundreds of community partners and other nongovernment organizations around the world that span initiatives in the arts, ministry, athletics, youth services, education and legal fields, environmental justice, and the health care industry, to name a few.

A few examples of community engagement initiatives during 2015–16 included the following: