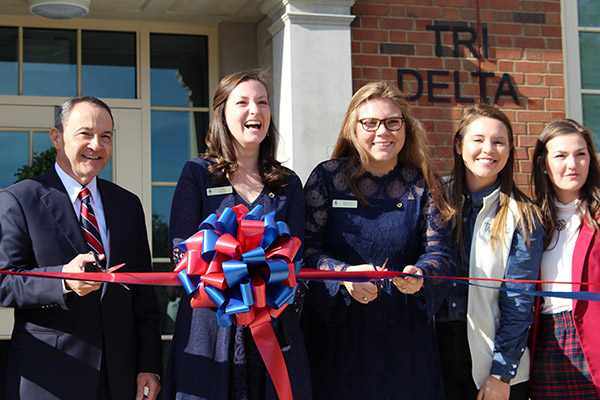 Calling it a place to “grow, but to go out into the campus and world,” members of Samford University’s new Tri Delta chapter joined with university officials, alumni and parents Nov. 11 to dedicate the sorority’s new residence facility during 2017 homecoming festivities.

The building in Samford’s West Campus, which houses 70 chapter members and other undergraduates, is the university’s first new residence facility since 2013. The chapter, which colonized in 2016, has 135 members.

Senior Callie Nickels, the chapter’s founding president, said the members were “excited to share this special moment.” Her sentiments were echoed by junior Madison Webster, the incoming president.

Reflecting on the chapter’s growth in its first year, Webster said she was “excited to see the chapter grow in their new space but also to go out and be active in the campus and the world.”

Hannah Patterson of Dallas, a national chapter development consultant for Tri Delta, assisted the chapter in its formation and expressed appreciation to Samford for providing the chapter “a physical place we can call home.”

Samford President Andrew Westmoreland offered a prayer of dedication for the new facility.

Samford’s Epsilon Xi chapter was the first new sorority on campus in about 20 years and was Tri Delta’s 137th chapter nationally.