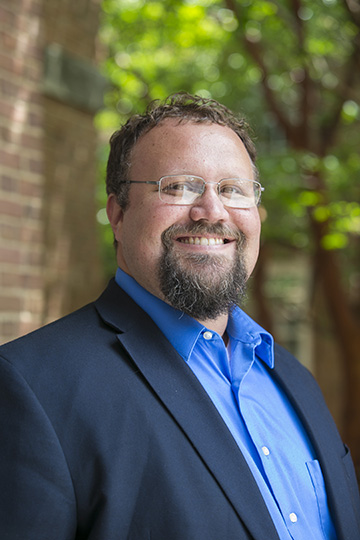 Samford University journalism professor Clay Carey is a lot of things–husband, father, teacher, mentor. In the fall of 2017, he added another item to the list. He is now a published author.

It was a work in the making, but after hours of research, interviews, writing and editing, “The News Untold: Community Journalism and the Failure to Confront Poverty in Appalachia” has hit the stands. “I’ve wanted to write a book since I was a little kid,” Carey said. “So, seeing that physical product with my name on it has been pretty amazing.”

He picked three “very rural” Appalachia communities that suffered from extreme economic distress. He spent six months total between each of these three communities, talking to newspaper owners, reporters, editors, residents, business people, advertisers, basically anyone that would talk. He read every news story, Facebook post and blog post and examined how each of the six newspapers covered local poverty.

In his book, Carey discusses challenging the dominant ideas about poverty and changing the way these hometown newspapers cover such a hard-hitting issue.

He wanted to see how the media can provide a voice to different groups of people, particularly what kind of coverage local newspapers in high-poverty, rural Appalachia communities offered their readers about poverty.

“The common thread across all three communities was that these local news organizations really didn’t talk about poverty that much,” Carey said. “Even though it was something that was very much front and center in these places.” He found the journalists were reluctant to write about poverty. Perhaps it would be embarrassing to the people written about, or perhaps the somber nature of the topic would drag the community down even more. So, it did not get covered.

In the book, Carey argues that if a community wants to try to develop innovative solutions to a problem, one of the things it needs to do is bring more discussions into the public conversation. “If we can get different perspectives, then we can start to change the way we look at problems in local communities,” he said. “If we challenge dominant ideas about poverty, maybe it makes it easier to find solutions.”

Sometimes the way things are in these small communities are illogical and hurt residents instead of helping them. This is one issue Carey saw when residents’ voices are not being heard.

One day, he met two single mothers at a thrift store. The three started to talk about rules regarding child support. One of the women shared a story about her children’s father. He had fallen behind on child support payments, so a warrant was put out for his arrest. Authorities found him, brought him in and then as punishment, suspended his driver’s license. Now he couldn’t drive, so he couldn’t go to work. So, he fell even more behind on child support payments.

Others told Carey stories about homeless people who set up tents under bridges. These people were typically shooed away, not because they were in a tent, but because they didn’t have a tent permit. Tent permits cost five dollars. “If you’re living in a tent under a bridge, you probably don’t have five bucks for a tent permit,” Carey said.

Carey knows there are people who are perfectly capable and willing to share their stories. The journalists just have to find those people. “If you empower more people, then you give people a platform to say, ‘This is my experience,’” Carey said.

He learned a lot from these six months. Natural challenges arose, but he tackled these head-on. Carey’s background as a small-town community reporter helped, but there was still much to be discovered.

He learned to be more compassionate. Carey said he knew that if he went back to being a reporter, he would be a better one. “I’d be more sensitive, and I’d be a better community servant,” Carey said. “I don’t think that I’d be softer,” he added, knowing that would be the criticism. Some reporters would argue that Carey would lose his independence. He disagrees.

“I don’t think compassion and independence are mutually exclusive.”

All in all, Carey is proud of his final product. He wanted to write something that other people could find useful, and he feels like he has accomplished that task.