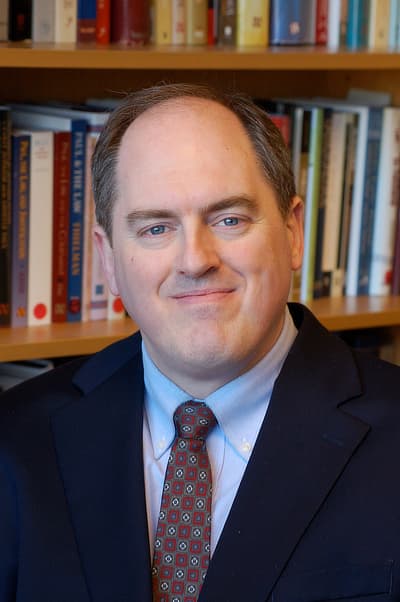 “Roy Ciampa brings to Samford the level of academic preparation and experience, scholarly work and commitment to Christian mission that are hallmarks of our university,” Hardin said. “His strong faith and deep Baptist roots, along with his extensive local church ministry experience, will enhance an already strong academic program that reaches all areas of the university.”

Ciampa previously was chair of the Division of Biblical Studies at Gordon-Conwell Theological Seminary, South Hamilton, Massachusetts. He served in several roles at Gordon-Conwell from 2001-14 and has continued as an adjunct faculty member since 2014.

Ciampa earned the Doctor of Philosophy degree in New Testament studies from the University of Aberdeen, Scotland, the Master of Divinity from Denver (Colorado) Seminary and a Bachelor of Arts in biblical and theological studies from Gordon College.

An ordained Baptist minister since 1993 with significant missionary and cross-cultural experience, Ciampa has served in a variety of ministerial and volunteer leadership roles for Baptist churches in Portugal, Scotland and the U.S.

“I am delighted that Dr. Ciampa will be joining the faculty of Howard College of Arts and Sciences to chair the Department of Religion,” said Howard College Dean Timothy Hall. “Dr. Ciampa brings to Samford University international recognition as a leading scholar of the New Testament studies. He has taught at a variety of institutions in the U.S. and around the world and has gained more than two decades of administrative leadership experience in higher education.”

In addition to his work with Gordon-Conwell Seminary and the American Bible Society, Ciampa has been an occasional lecturer for the Perspectives on the World Christian Movement and a visiting scholar at institutions in Italy, The Netherlands, Angola, Portugal and The Philippines. He is author of New Testament commentaries and has written extensively for professional and academic publications. He also was a member of the revision team for A Bíblia para Todos (The Bible for Everyone), an interconfessional translation of the Bible published by Editora Bertrand in Lisbon, Portugal.

“We were delighted to see our search draw in candidates from across the country and even a few from across the Pond,” said Leonard. “It did leave us, though, with the difficult task of choosing from a number of very qualified people. With his obvious love for students and for the Scriptures, his deep connections with Baptist life and his evident leadership skills, Dr. Ciampa stood out among our candidates every step of the way. This is an important moment in the life of the religion department, but I feel confident we’ve tapped the right person to lead us in the years ahead.”

“Jesus is the criterion for Dr. Ciampa’s biblical interpretation. I was deeply moved by this confession,” Smith added. “He is personable and will provide a bridge between faculty and students. Dr. Ciampa is a good fit for Samford in that he marries the cardiological (heart) and the cranial (head), which allows him to break down profound pedagogical thoughts and translate them in ways that university students can understand.”

Students in Samford’s Department of Religion explore many of life’s deepest questions while developing practical skills that enable them to succeed in many professions, including ministers, scholars, social workers and preachers. Students study the Bible and Christian theology, as well as the history, sociology, and philosophy of religion. Courses examine not only the Christian tradition in which Samford is rooted, but also the many different religions that shape the world. Every undergraduate student at Samford takes Biblical Perspectives, a religion course in the university’s core curriculum. The Preministerial Scholars program offers scholarship support and a variety of internships and small groups to help nurture students preparing for ministry. Religion majors are eligible to participate in a fast track option for the master’s degree in social work. Students in this "3 + 2" program complete both a B.A. and an M.S.W. in five years.