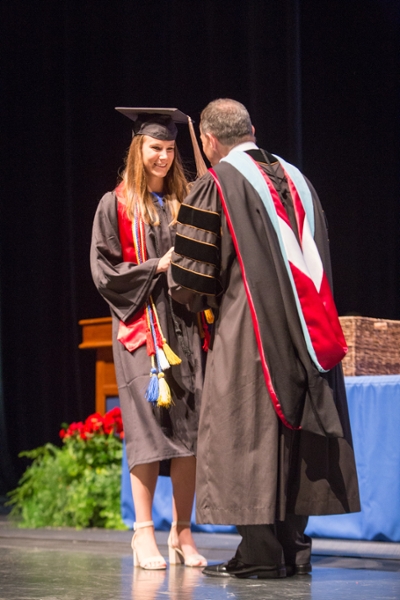 Mary Katherine Stanley, a University Fellow and accounting major from Memphis, Tennessee, received the President’s Cup award. This award is given to the graduating student with the highest undergraduate grade point average (GPA) across all Samford colleges and schools.

Claire Elizabeth Jaggers, a journalism and mass communication major from Jackson, Tennessee, received the Velma Irons Award as the graduating student with the second highest undergraduate GPA across all Samford colleges and schools.

Two students – Lilla Bea Granger and Hollie Woodis -- received the John C. Pittman Spirit Award, named for an alumnus and longtime trustee and awarded to the graduating student or students who most consistently exhibits exceptional Christian character and community life.

Granger, a Brock Scholar and business major from Pike Road, Alabama, was recognized for her service on campus and in the community.

According to her nominator, Granger exemplifies Samford’s motto: For God, For Learning, Forever. “She is motivated to her best, whether pursuing her academics, her relationships, and her service to others. She used internship opportunities to learn from organizations working in the nonprofit sector. She did not just seek well-known and publicized opportunities. In fact, for both of her official Brock Scholars internships she was the first intern with that role in those organizations. Her internship last summer with the American Academy of Achievement led to a full-time job offer, and she will continue with them upon graduation.”

Woodis, a journalism and mass communication major from White House, Tennessee, has been recognized by the administration, the faculty and by her fellow students as a role model of Christian servant leadership.

Her nominator noted that she was named an Ambassador during her sophomore year and has “always worked more than her share of events with a smile and a genuine interest in serving our constituents. She served as a Connections Leader and as an Orientation Leader, and dozens of our students have benefitted from her wise counsel as they embarked on their own Samford journeys. She gives herself to others every day, always with a winsome smile and a positive, infectious, faith-filled attitude.”

During the Cumberland School of Law commencement Alexander (Alex) G. Thrasher received the Daniel Austin Brewer Professionalism Award. This award was endowed by the late Gov. Albert P. Brewer, a former distinguished professor of law and government and professor emeritus at Cumberland, in honor of his father. Each year, the award is granted to a third-year Cumberland student who best exemplifies the high standards of ethics and professionalism expected of members of the legal profession.

While a student at Cumberland, Thrasher was a first-year honor court justice from 2015-16 elected by his peers, served as junior editor of the Cumberland Law Review from 2016-217 and was a research editor for Law Review from 2017-18. He was a recipient of a merit scholarship, an Elite Eight competitor in the Williams first year trial competition, a street law program teacher and a Caruthers Fellow.