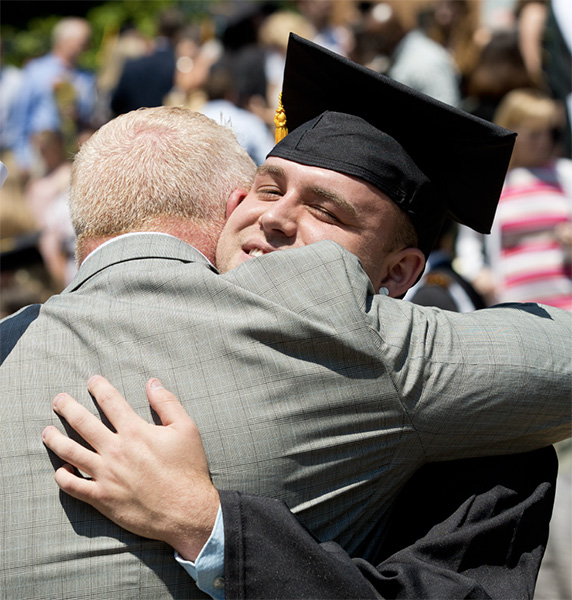 Samford University’s Howard College of Arts and Sciences presented degrees to 188 students May 12, and welcomed home a distinguished alumnus for the 2018 commencement address.

Hall noted that in addition to his professional achievement, which includes service as assistant city attorney for the City of Hoover, Alabama, and counsel for other governmental boards, Evans is active in Mountaintop Community Church and supports Legacy YMCA, the Chamber of Commerce and short-term missions in the Bessemer, Alabama, community. His engagement with the life of Samford’s campus has included service as president of Cumberland Student Bar Association, undergraduate leadership and singing with Samford Gospel Choir. He earned Cumberland’s Spirit of Service award for completing more than 100 hours of community service.

Rather than linger on the golden memories of his time on campus, Evans emphasized the painful and uncertain period after graduation, when he learned that his vision of success would not be realized quickly or easily. “I had to learn to grow in times of waiting,” he said. “When things start to happen that are not what you planned,” he advised the graduates, “stay grounded, stay focused and always strive to be better than when you started.”

Although Evans had never struggled as a student, he discovered that there were many other outstanding students competing for acceptance to law school. Waitlisted at 10 schools, he chose to wait with his family at home, where his mother’s counsel of patience and prayer helped keep at bay his feelings of failure. When he expressed his frustration in the doldrums, his mother replied, “I know God’s got it.” He heard her conviction, saw her pray and took comfort in the example.

He also took comfort in Psalm 34. “I love it because it so perfectly gives the best encouragement and the reality check and all the good stuff that a graduation speaker should tell you—how to act, how to speak, how to think, how to be humble, how to grow in faith, how you’re meant to be in community and what it looks like to trust in God,” Evans said. “It simply tells us to stay grounded.”

Evans remained focused on his dream of a law career, traveling with his family for interviews. “Then it just started happening,” he said. “I got yes after yes after yes.” He found his place at Cumberland School of Law, but he had to pay as well as pray, and scholarships did not follow the invitation. He found a challenging and sometimes frustrating job that got him through his first year, and although he wasn’t living his dream he embraced the opportunity as an unexpected answer to his prayers. “I still worked to the best of my ability, making it the absolute best it could be, even growing the program,” he said.

Evans went on to clerk for a judge, pass the bar and find work that challenged him to grow both professionally and spiritually. He learned to recognize the lessons of waiting, and he passed along that wisdom when he returned to the stage at Samford’s Wright Center Concert Hall. “When you bring positivity to a situation, when you don’t complain, when you encourage someone even on your worst days, when you walk in your faith every day, when you learn from your failures and live Psalm 34, these are the times when you make the greatest impact, not just on yourself, but on the people you meet,” he said. “You can and will impact the world.”

Also at the Howard College of Arts and Science commencement ceremony, Journalism and Mass Communication graduates Claire Jaggers and Hollie Woodis earned two of the university’s top honors. Jaggers earned the Velma Wright Irons Award for attaining the second-highest GPA of the graduating class. Woodis was named winner of one of the university’s two John C. Pittman Spirit Awards, which honors students who consistently exhibit exceptional Christian character in community life. The award is given in memory of the 1944 alumnus who served 62 years as a trustee. His nephew, W. Randall Pittman, is vice president for university advancement and helps present the honor each year.