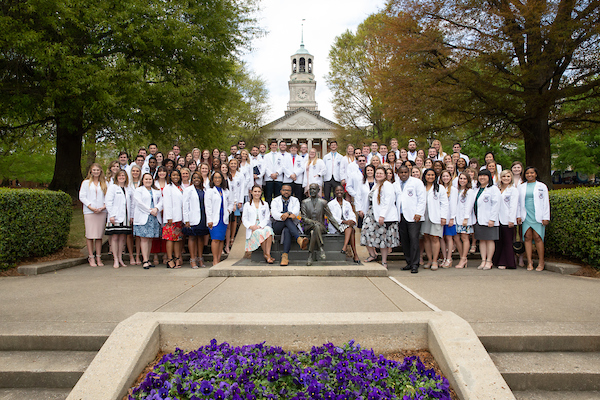 “This annual event recognizes students as they make the transition from a predominately classroom environment to advanced pharmacy practice experiences,” said Michael Crouch, dean of McWhorter School of Pharmacy. “The purpose is to recognize this important milestone, and to emphasize these students are taking on new responsibilities.”

Fred Coleman Sandlin III, chief executive officer and owner of Fred’s Pharmacy in Hamilton, Alabama, and 2008 alumnus, provided the keynote address. Sandlin is a third-generation pharmacist who is active in advocating for the profession at the state and national level.

As he spoke to students, he challenged them to prepare for their fourth year of rotations by using the platform of pharmacy to build strong relationships with their patients and their community.

“In my practice, we strive to focus on, not necessarily what is the matter with the patient but instead, what matters to the patient. What kind of needs do our patients have?” Sandlin said.

Pharmacists have the opportunity to change people’s lives through the trust they can build with their patients, Sandlin continued. “When I travel to Washington, D.C. to meet with members of Congress, I tell them that I’m not here from a business standpoint. I’m here on behalf of the people who walk into my pharmacy every day,” he said.

Sandlin shared many stories from his days in pharmacy school, mentioning specific faculty members who helped him along the way. “I’ll tell you, I’m not a self-made person. I would not be standing here today without the help of the people around me,” he said.

In addition to the presentation of professional pins to all third-year, the school presented three significant awards.

Third-year pharmacy student Bobby Green received the Excellence in Public Health Pharmacy Practice Award. This prestigious award is presented by the U.S. Public Health Service to 75  pharmacy students throughout the country who have made significant contributions to public health. Green was recognized for his leadership in the implementation of several programs, including the Birmingham Healthcare Access Movement, a student-led interprofessional event.

In addition, third-year pharmacy student Sadie Nielsen is this year’s recipient of the Cardinal Health Annual Independent Pharmacy Scholarship, the largest scholarship awarded by the school. Established in 2012 by Cardinal Health, the award provides a full-tuition scholarship for the final year of pharmacy school. Christopher Gersitz, the director of territory sales for Cardinal Health was present to make the announcement.

Finally, associate professor Bruce Waldrop was this year’s recipient of the Margaret Self Propst Teacher of the Year Award. This is the highest teaching honor given by McWhorter School of Pharmacy.