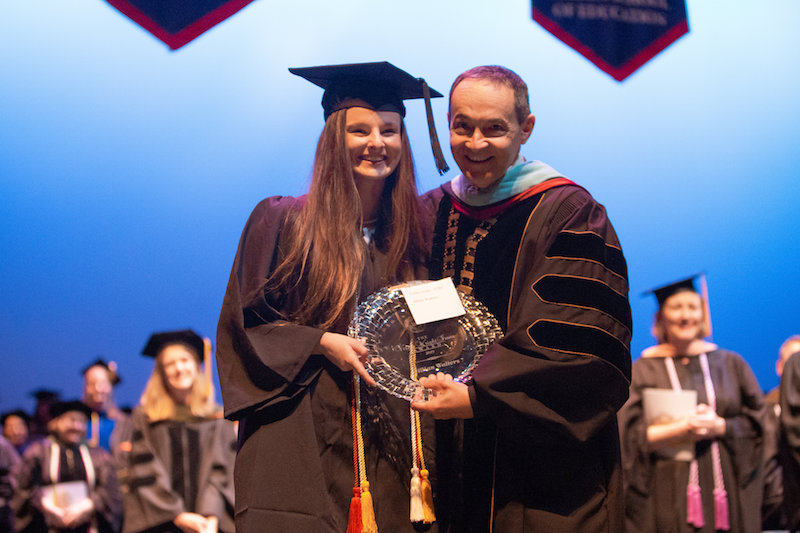 Jillian Walters is the first pharmacy student to ever receive the Velma Wright Irons Award.

Samford University’s College of Health Sciences awarded 316 bachelor’s degrees on Friday, May 10, to graduates of the undergraduate programs in its four schools: School of Health Professions, Ida Moffett School of Nursing, McWhorter School of Pharmacy and School of Public Health.

Four students, representing each school, spoke on the theme of calling, reflecting on how this important milestone marks just the beginning of their professional lives.

“Four years ago, we started one of the toughest but one of the most rewarding journeys of our lives,” said Kamron Buehler, a Bachelor of Science in Nursing graduate from Ida Moffett School of Nursing. “Together, each of us began a path to pursue what God had called us to do.”

Buehler explained that her simple desire to care for others proved to be a driving motivator throughout nursing school. “The reasons behind why we each chose this profession tells an even greater story of the Lord’s faithfulness,” she said.

Each graduate now embarks on the next phase of their careers, whether it means starting a job or continuing to graduate school. Whichever path they chose to pursue, Jamond Glass, a Bachelor of Science in healthcare administration graduate from the School of Public Health, encouraged them to recognize the Lord’s intentionality throughout the journey.

“Everyone here was born to this life with a divine purpose,” he said. “Some already have discovered their purpose and passion while others are still searching. While searching, hold faith that God will open doors for you.”

Glass proudly announced that he is a first-generation college graduate, giving thanks to his mother and grandparents for shaping him into the man he is today. “I don't believe this is only an accomplishment for us individually but an accomplishment for our families and communities, as well as the lives we will touch throughout our lifetime,” he said.

Taylor Anderton, a Bachelor of Science in health science graduate from the School of Health Professions, admits that she struggled to know where the Lord was calling her to go, but through the support and mentorship of Samford faculty, it became clear.

“I believe the individuals within this university have shown us that in order to live out God’s calling for our lives we must know the why behind our what.” Anderton said. “Our calling as believers may be too complex to fully comprehend, but the Bible’s command is clear: Our job, no matter the setting, is to demonstrate that the reality that exists in heaven can be manifested right here, right now. We are not to be just people who believe the right things about God, but people who put the will of God on display.”

At this ceremony, McWhorter School of Pharmacy awards its second-year Doctor of Pharmacy students with a Bachelor of Science in pharmacy studies, marking the halfway point of their graduate program.

“As students, we can forget about the importance of reflecting on our passion and calling,” said Zac Curren, a second-year Doctor of Pharmacy student. “I hope that each of you sees this milestone as a reminder of why you are here today. Use this day to remember that you are here for a reason, you are embracing your calling, and you are fulfilling a purpose in your life.”

In addition to awarding degrees, University President Andrew Westmoreland presented two university awards. Jillian Walters received the Velma Wright Irons Award along with her Bachelor of Science in pharmacy studies. This award is given to a member of the Class of 2019 with the second-highest cumulative grade point average across all campus colleges and schools. This is the first time the award has been given to a pharmacy student.

Brittany Morgan, a Bachelor of Science in sports medicine graduate, received the John C. Pittman Award. Named for a Samford alumnus and longtime trustee, the award recognizes graduating seniors who exhibit a serious commitment to being a student and achieving academically, to honoring Christ, and to personal health and involvement in student life.

“As we move into this next stage of life and pursue the path the Lord has called us to, may we be challenged to always remember why we started this journey, how we have been transformed by this journey, and how we may impact someone else’s journey through the care we provide,” Buehler said.