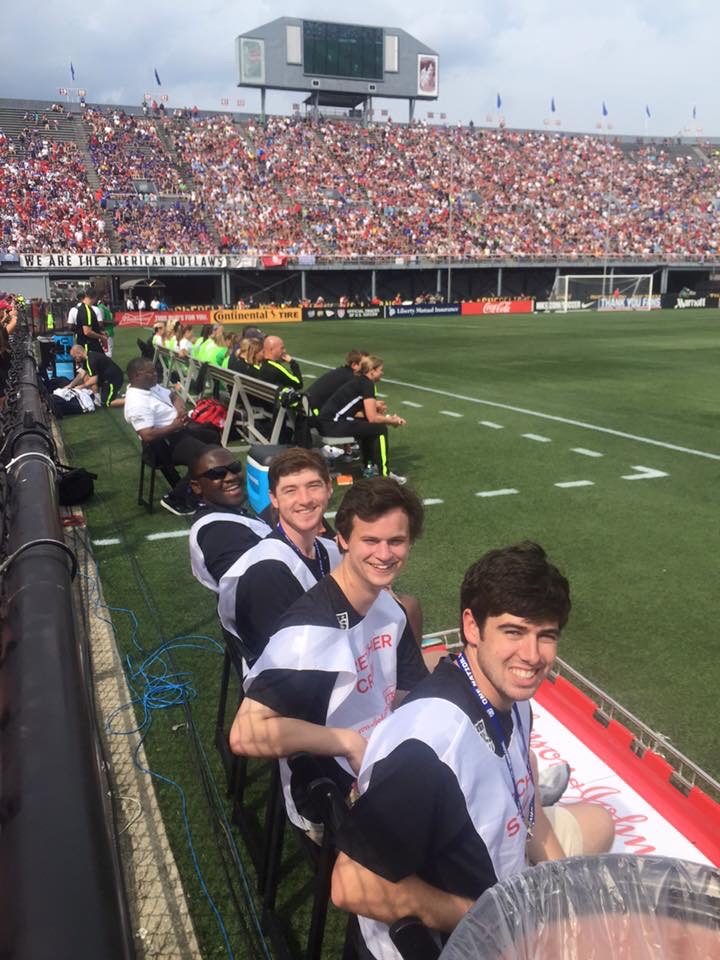 Former Samford students assist on the sidelines during a U.S. Women’s Soccer game as part of the Nike Victory Tour following their 2019 World Cup win. The students even had their own media attention during the live ESPN broadcast.

Launched in 2017, Samford University’s Center for Sports Analytics seeks to be an international thought leader in the growing field of sports analytics. Through the center, students are enriched with unique opportunities for learning about all areas where analytics impact sports, including fan engagement, sponsorship, player tracking, sports medicine, sports media and operations. Over the last few years, the work of the center has been highlighted in numerous national and international media, which has helped expand opportunities for Samford students.

In January 2021, Leeds Live, a news publication in Leeds, England, published "Leeds United's unique global commercial opportunity and the Gen Z tactics they must adopt." Here, the center’s research on the growing international fan base of the newly promoted English Premiere League (EPL), Leeds United FC, was highlighted. The work of the center is often mentioned in a Leeds United podcast, Lad to Leeds, where the center’s executive director, Darin White, is affectionately referred to as “the prof.” As a result of the center’s growing reputation in the U.K., the center is currently in negotiations with two English Premiere League teams about potential student projects in 2022 and beyond.

In February 2021, The Washington Post published "As biometrics boom, who owns athletes’ data? It depends on the sport," in which the center provides expert commentary on the rights that sports organizations have when it comes to gathering athletes’ biometric data.

Additionally, the research and expertise of the center has been highlighted in International Business Times, the Wall Street Journal, Sports Illustrated, Forbes, USA Today, ESPN Radio, Al Jazeera, Sports Business Journal, Bond Buyer and NPR, among others. The center was also represented at the Yahoo Sports Technology Awards, the "Oscars of Sports Technology," in London in 2018. There, White served on a panel of judges comprised of international figures who collectively represented every facet of the sports technology industry. Samford was one of only two U.S. universities represented on the judges’ panel.

In the last year, the center’s website has had over 150,000 page views. Significant traffic to the site comes from the U.K., Canada, India, Australia, Philippines, Germany, Singapore, Spain and France. The site saw a 500% increase in web traffic in September 2020 and then again in November 2020 following the published research about the English Premiere League. The center leadership uses Google Analytics to determine what type of web content is most effective at attracting international attention and then uses this information to craft future research ideas.

Sports analytics student research published on the center’s website has also led to high-level exposure for students. “Recently one of our student’s work was highlighted on the ‘Driveline R&D’ podcast, a top Sabermetrics-related podcast, which was influential in him obtaining a role working with Vanderbilt University’s baseball program,” said center fellow Matt Mazzei. “Additionally, students have been able to connect via social media with some of the top analytics executives in the sports industry thanks to the recognition of their research on the center’s website.”

In addition to the international media attention the center has received, it holds a partnership with SAS, the global leader in sports analytics. Through innovative software and services, SAS empowers and inspires executives around the world to transform data into intelligence.

“The endgame in all of this is to help our students by highlighting their research to a global audience, by growing sports analytics internship opportunities, and by developing partnerships for class projects,” White said. “I am hopeful that the international attention will one day lead to partnerships with teams in the U.K. that allow our students to spend a semester living in the Daniel House while gaining international sports business and analytics experience by interning with U.K. based sports properties. We are on the cusp on making that a reality.”