Samford Awards 1,340 Degrees to Class of 2021 During Five Ceremonies

For the first time in a year, Samford University held five on-campus, in-person commencement ceremonies to celebrate the 2021 graduates and recognize the class of 2020, who was not able to have an in-person event last year. The university awarded 1,340 degrees.

President Andrew Westmoreland, who will retire in June after serving for 15 years, was the featured speaker at three ceremonies including the commencements for graduate students of the College of Health Sciences, undergraduate students of the College of Health Sciences, and finally for graduates of Howard College of Arts and Sciences, Brock School of Business, Orlean Beeson School of Education, and School of the Arts. At each ceremony, he provided three different lessons for a total of nine that he urged students to follow as they embark in the next stage of their lives.

“The nine points reflect the things I have tried to understand over the 42 years of my career in higher education, things I lived out very imperfectly but that I still hold as the aspirational goals for my life and my work,” said President Andrew Westmoreland. “They are incredibly simple, yet difficult to live out.”

Lesson One: I need to listen carefully.

Westmoreland recalled that many of the arguments he experienced in life were, at their root, the result of poor listening. “Have you noticed during this era of masking that we have begun to return to the practice of looking at another person’s eyes as we hear them? Now that’s a COVID practice to retain. Let’s listen with our ears and our eyes. Let’s give our full attention,” he said.

Lesson Two: I need to guard and limit my own speech, spoken or written.

“Our first draft is seldom our best draft. Our thoughts, our conclusions and our speech benefit from reflection and refinement,” he said.

Lesson Three: I need to extend grace to others, even if I feel I have not received grace from them.

In today’s society, Westmoreland comments, insult often begets insult and hurt is returned in equal measure. “We might remember that we are the beneficiaries of unmerited grace from a loving God. I need to do my part to end the cycle of destruction. I need to extend grace to others even if I feel I have not received grace from them,” he said.

Lesson Four: I need to apologize – quickly and without qualifying conditions – when I am wrong or when I have hurt someone.

“You are likely to make a few mistakes in life. Some of them will be worse than others. But when you have been wrong or when you have hurt another person, don’t let the sun set before you do your part to put things right,” he said. “And don’t ever say something like, ‘I’m sorry if you took what I said the wrong way.’ They took it how they took it and you can’t fix that. Be quick and be sincere and learn from whatever you said or did.”

Lesson Five: I need to recognize that the loneliness I sometimes feel is shared by everyone.

“We all doubt our own abilities, wonder about navigating challenges and occasionally think that we are truly alone. As I have come to realize that the things that bother me are more nearly universal than I knew, my burdens have been easier to bear,” Westmoreland explained.

Lesson Six: I need to find happiness in the fleeting moments of the day. 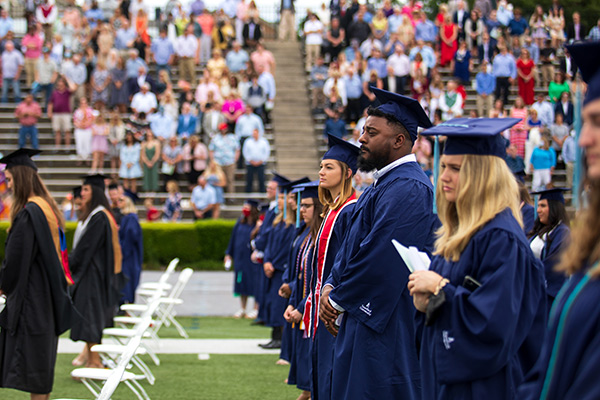 He urged students that even on the worst days, take a minute to remember something to make you smile.

“If you will lift your head from the clutter and think of someone dear to you or of something funny that you heard a month ago or something of joy that you plan to do after you live through whatever it is bogging you down at the time, or even a big plate of Alabama barbeque, your spirit will be calmed, and you will have renewed strength for the journey.”

Lesson Seven: I need to respect everyone.

Westmoreland continued, “We don’t have to agree with everybody because that would be incredibly boring, but offering respect to everyone, without regard of whether that respect is returned, is maintaining an open door to civilization.”

“A few hundred times over the past 15 years when the walls were closing in on me and the meetings and problems just wouldn’t stop, I stood up, walked away from my desk and circled the Quad,” he reflected. “Fifteen minutes and three or four conversations later, my spirit was soaring again, and I had answers that had previously eluded me.”

Lesson Nine: I need to remember to trust the Lord with all my heart and lean not on my own understanding.

For this final lesson, he cited Proverbs 3:5, urging students to trust in the Lord and realize that they do not have all the answers.

“Do these things and when you are old, your lives will be fulfilled, your families will be happier and maybe, just maybe, the world will be better for it.  And when this ceremony ends and you’ve said your final goodbyes—a new covenant will exist between you and Samford University because, for all time to come, this will be your alma mater,” Westmoreland said in his closing remarks. “Wherever you go, whatever you do, you will carry our cherished hopes and dreams, just as you carry your own.”

Rev. Andrew Beeson, an American missionary who was imprisoned and held on false charges in Turkey for two years, spoke at the Beeson Divinity School commencement, where he challenged the graduates to prepare to stand firm under persecution.

“I think you are coming into a much more challenging environment than I did when I graduated from seminary 30 years ago,” Brunson said. “This time needs men and women of courage who will remain faithful to Jesus under pressure.”

Julia Sisk, a graduate of the Brock School of Business, received the John C. Pittman Spirit Award, which honors the 1944 alumnus who served on the university’s board of trustees for 62 years.

Read more about the individual commencement ceremonies below.