Graduates Focus on Friendship, Faith and Scholarship at Prayer Breakfast 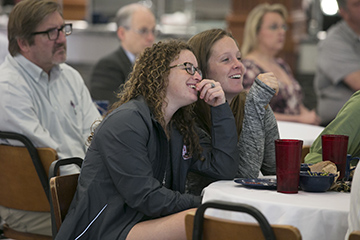 Words of inspiration and encouragement around the themes of friendship, scholarship and faith were the focus of the annual prayer breakfast for spring graduates of Samford University. About 300 graduates and faculty members gathered May 13 for what has become an important tradition of spring commencement weekend.

Ashley Lyon, an education major from Alpine, California, told of how her friends rallied around her and her family during the illness and death of her brother last year.

“You have walked through the darkest days with me,” Lyon said. “Leaving my family to return to Samford was the hardest thing, But, you welcomed me back. It was a blessing for me to come back to Samford.”

Lyon said that friendships are the “best thing about Samford. What makes this place special are the people.”

Todd Yelton, Samford’s soccer head coach, echoed Lyon’s sentiments as he talked about how the Samford community helped him and his family during the illness and death of his wife, Shauna, in 2015. Shauna Yelton had served as director of Samford’s health services for several years.

“In the most difficult moment of my life, this university demonstrated to me what friendship is like,” Yelton said. “We are blessed to be surrounded by fantastic friends here. Cling to those friendships. If you do, your future will be extremely bright.”

Brianna Ware, a piano pedagogy major from Gadsden, Alabama, used an acrostic to emphasize the role of scholarship. Among her admonitions were to “do everything with honesty and integrity.”

Using a three-pronged response for the letter P — payoff, providers and play — Ware urged her fellow graduates to “thank those who helped to make our journey possible.” She also reminded her peers to “play a little bit.”

“I was able to make some of the best friends I will ever have with the small amount of play [time] I allowed myself to have,” she said.

Walker Edmonson, a religion major from Oneonta, Alabama, said Samford did three things for him after he transferred from a nearby community college: welcomed his faith, challenged his faith and nurtured his faith.

“I challenge everyone here,” he said. “Find people and circumstances were you will be welcomed, challenged and nurtured in your faith.”

In his challenge, Samford President Andrew Westmoreland told the graduates, “In every way imaginable, you have touched our lives and caused us to be better people because you were here.

“This institution will endure long after all of us are gone. But, it will be stronger because you are here today and because of the memory that you were here. You will make the world a better place because of your time at Samford.”

The prayer breakfast is hosted by Westmoreland and coordinated by the Office of Spiritual Life.