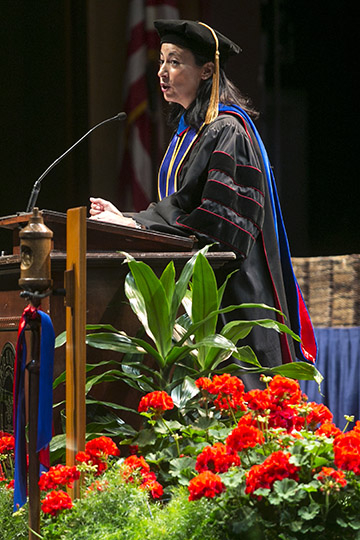 Despite challenges and brokenness in today’s world, this year’s graduates give her hope, Betsy Holloway said at commencement ceremonies for Samford University’s Brock School of Business Friday, May 13.

“I remain hope-filled, optimistic even, in large part because of you, and the hope I see in you, and in my confidence in your passions to use your God-given abilities,” said Holloway, noting the knowledge they’ve gained “to dream up creative solutions, to address the world’s toughest problems, to go out into the world, push back the darkness, and let in the light.

“Your foundation is strong, and you’re ready for the journey ahead,” she told the graduates, acknowledging the faculty and family members who have helped prepare them.

“Our world needs you, surely more than any graduating class before you. Never at a time in human history have we faced the depths and the complexities of the evils plaguing our world today,” Holloway said, citing poverty, illiteracy, racism, hunger, crime, corruption, human trafficking, drugs and war, among other problems.

Holloway, Samford vice president for marketing and communication and professor of marketing, serves as the university’s chief marketing officer. She also teaches undergraduate and graduate courses in the business school.

A total 143 seniors received degrees in the business school’s bachelor’s, Master of Accountancy and Master of Business Administration degree programs.

Holloway used the unusual growing habits of the Chinese bamboo tree to illustrate the Bible’s assurance that as soil makes a sprout grow, the Lord will make righteousness and praise spring up before all nations.

While spending a year as a young adult teaching English in rural Japan, Holloway said, she often sought tranquility beneath the shade of tall, swaying Chinese bamboo trees near her tiny apartment. Years later, while on business in Brazil, she learned that the tree is often used in place of metal and other more modern materials as scaffolding in building construction.

“It’s known as the miracle plant because of its strength and resilience,” she said of the plant that can take five years to develop a root system and for its sprouts to break through the ground.

“When you plant a bamboo seed, it can take a long time before you see any results. During that time, the root system is quietly forming, developing a strong foundation. Once this foundation is in place, the bamboo shoot flies up, up to 80 feet tall in less than a year,” she said.

“Had the tree not taken years to first develop a strong and unseen foundation, it could not have sustained this growth,” Holloway said. “The years of fertile soil, water and sunlight allow the
Chinese bamboo roots to strengthen so that the tree can become resilient.”

Scripture, she noted, says that the kingdom of God is like someone who plants seeds in the ground.

“Night and day, whether the person is asleep or awake, the seed still grows, but the person does not know how it grows. We are called to enter the field, to plow and to continue to scatter seed, for we are God’s workers in God’s field. Let us not grow weary of doing good, for in due season, we will reap if we do not give up,” Holloway said.

Laura C. Bean, a Brock Scholar and University Fellow from Murfreesboro, Tennessee, received the Velma Wright Irons salutatorian award as the graduating senior with the second-highest cumulative grade point average across all academic units at Samford. She was presented a silver tray by Samford President Andrew Westmoreland.

Brock School of Business Dean J. Howard Finch reminded the graduates that while the ceremony will be the last time their professors sit in front of them as faculty members, “We will always be your teachers.”

“Wherever you go, you will be part of Brock School of Business and Samford University. We will always believe in you,” Finch said.

Speaking to her fellow graduates, bachelor’s degree recipient Caroline Novkov of Signal Mountain, Tennessee, charged them to remember to keep Christ in their hearts and minds as they move into new areas of their lives.

Recalling advice that her father once gave her, Novkov suggested, “It’s not how great our ideas are, or how much money we make, but it’s who we are working for” that’s important.

The Brock School of Business ceremony was one of seven Samford commencement programs held May 6–14. The ceremonies mark the official beginning of the university’s yearlong 175th anniversary celebration.