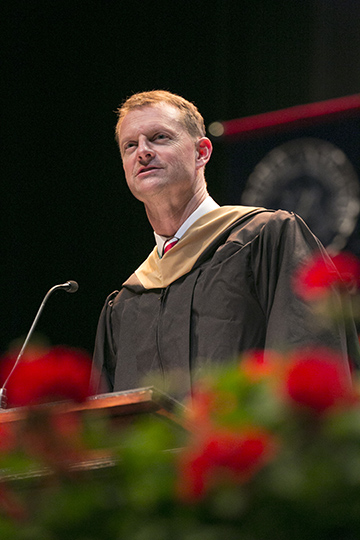 Graduates of Samford University’s McWhorter School of Pharmacy were encouraged to find contentment in both their personal and professional lives during commencement ceremonies May 6.

Drawing from a commencement speech his late father made at Samford in 1989, Stuart C. McWhorter told the 215 graduates that the most accurate measure of success is happiness. McWhorter is CEO of the Nashville (Tennessee) Entrepreneur Center.

“The most fortunate people are those who find contentment in both their professional and personal lives,” McWhorter said. Quoting the philosopher Confucius, he added “Choose a job you love, and you will never work a day in your life.”

McWhorter recalled his father’s extensive career in health-care administration but said his “best days” began when they formed a venture capital firm in 1996.

“It was his passion to partner with great talent to create and launch innovative businesses,” McWhorter noted. “It was about aligning with smart and passionate entrepreneurs and making the bet they would succeed.”

McWhorter gave the graduates four principles that he said were important to his father throughout his life and career: carefully select your role models; be prepared; think and act like an owner; and give back to others.

“My father spoke often of his many mentors along life’s journey and credited each one for his success, knowing that it would not have occurred without their interest in him and support of him,” McWhorter said.

Being prepared is something you cannot “overdo,” he added. “You have to be prepared to meet the challenges and embrace the opportunities.”

He also encouraged the graduates to “act like an owner, no matter what position you hold in the company or with your employer.

“If you think like an owner versus just an employee . . . you will see your horizons expand and your fears diminish, and you will think in concepts and not in mechanics. Your career will flourish, and your life will change.”

McWhorter also told graduates that they have “some level of responsibility” to give something back to family, university and community.

“The time to give back is now. It is something you will do over your lifetime,” he explained. “No matter what paths you take, you all have a responsibility to be good community-minded citizens, and that means giving something back where you live and work.”

Pharmacy dean Michael Crouch presented McWhorter with a framed photo of his late father’s last visit to the campus. Earlier, he noted that this was the 20th anniversary of the naming of Samford’s pharmacy school for the McWhorter family. In 1996, Clayton McWhorter made what Crouch described as a “transformational gift” honoring his family that “put this school on a positive trajectory that continues today.”

Degrees were awarded to 109 Doctor of Pharmacy candidates and 106 Bachelor of Science in pharmacy graduates.

The ceremony was the first of seven scheduled at Samford over the next week.