Warren Asks Arts and Sciences Graduates to Help End Some Worlds, Build Others 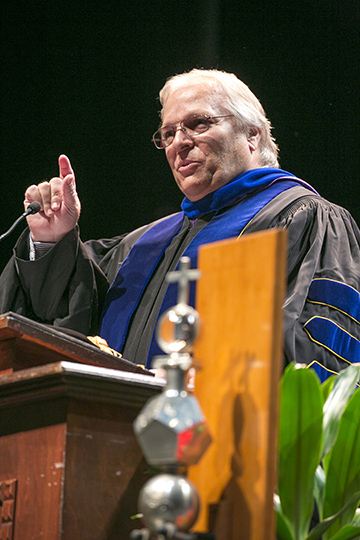 Samford University’s Howard College of Arts and Sciences presented approximately 200 undergraduate and graduate degrees May 14, including degrees for two women who completed their work decades after they began it.

In a unique twist on a common commencement theme of changing the world, Warren said he sometimes prays for the end of a world, or, in fact, many worlds, where “hatred too often dominates . . . where peace seems to be an impossible dream . . . where we seem to spend more time defending what divides us rather than promoting what unites us . . . and where we make our own gods in our own image and likeness.”

Warren described Operation Iceberg, the largest battle of the Pacific theatre in WWII. His father took part, as did Warren’s home church pastor, Howard College alumnus Ernest Walker ’50, who offered the benediction for the commencement ceremony. The Allies won the battle, Warren said, “but the price was high to end a world of domination, to end a world of aggression.”

Warren wondered what the 2016 graduates would do on their own watch. “Our hope is with you,” he said. “It’s that you will make a difference in the arenas of health, poverty and wealth, political and social stability, and in the families you create. ” He urged them not to spend their lives waiting for the “right time” to meet these great challenges, but to be a force for good now, at any scale and wherever God calls them, and to adopt the Prayer of Saint Francis as their own goal and prayer:

Journalism and mass communication major and 2016 class president Margie Terp of Temple Terrace, Florida, offered the class farewell. “No matter where you go,” she told her fellow graduates, “take Samford with you in the joy that you will bring to others, in the service you will do for your community and in the strength you will have to share your faith.”