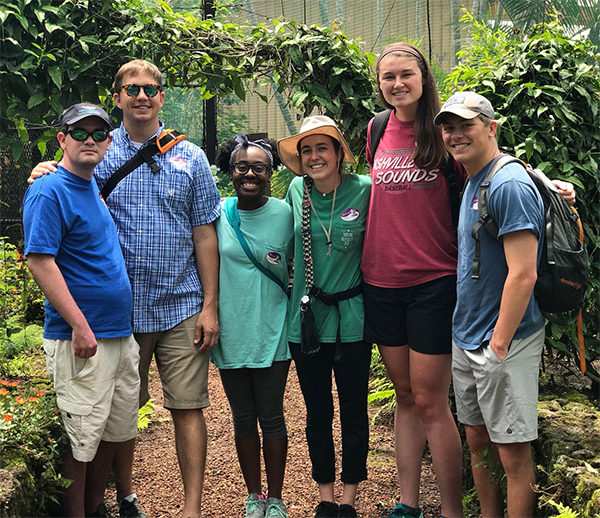 Biology professor Drew Hataway (second from left) with some of the 16 students in Samford's Biology, Culture, and Revolution in Latin America course

Samford University students explored a variety of subjects in Panama and Costa Rica this summer. Led by biology professor Drew Hataway and history professor Carlos Alemán, the academically diverse group of 16 students in the Biology, Culture, and Revolution in Latin America course earned humanities and lab science credits over two weeks of travel and study.

Course highlights included a trip to Monteverde Cloud Forest Reserve, where students saw endangered birds, a train journey along the Panama Canal,  a visit to the climate-threatened San Blas islands and a tour of the city of Casco Viejo.

Biology student Madeline Fric aspires to one day work in biology research, so the visit to Barro Colorado was a dream come true. “For me, it was a real-life game of ‘I Spy’ finding various plants and animals,” she said.

“I learned how important experiencing the world is outside of the classroom in your given field,” Fric continued. “There is so much to experience after undergraduate schooling is finished, and I am excited to see what is in store for me in the next chapter of my life.”

“It was awesome,” Hataway said of the interdisciplinary study abroad experience. “The students all had a really good time.”

Hataway hopes the course will be offered again, perhaps with a stronger focus on land use and planning.