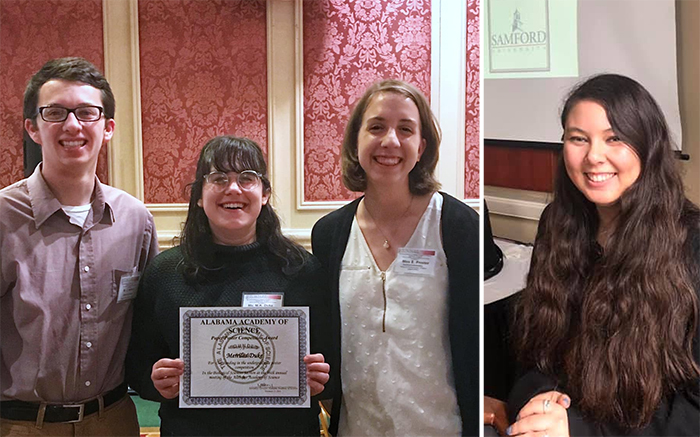 Students and faculty of Samford University's Department of Biological and Environmental Sciences earned top honors at the 96th annual meeting of the Alabama Academy of Science at Tuskegee University Feb. 20-22.

Students Merrilea Duke, Johnny Herbert and Erin Prester, and professor Malia Fincher earned the event’s poster award for their research on the natural defensive compounds produced by oak acorns to defend themselves against weevils and other attackers that consume a large portion of the acorn crop each year.

Student Karen M. Inouye, department chair Anthony S. Overton and Alabama A&M University professor Douglas A.Smith earned the oral presentation award for their documentation of the first evidence of natural reproduction of striped bass in the Tennessee River. That work is particularly significant because the research discovered that Wheeler Reservoir is supporting a breeding population of striped bass, and this is one of only three lakes in the country where these fish have been shown to be spawning.

Samford’s Howard College of Arts and Sciences (HCAS) emphasizes undergraduate research and collaboration with expert faculty as a key experience of preparation for careers. Projects from each of the 14 HCAS departments will be featured at the college’s annual research fair in April.