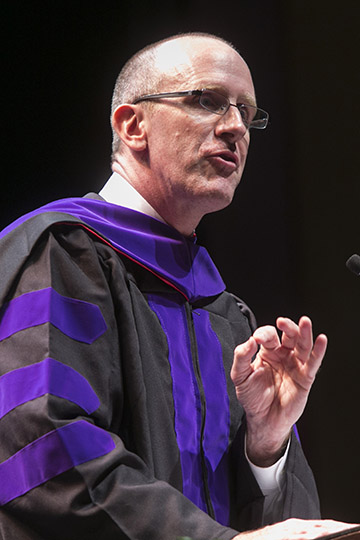 Graduates of Samford University’s Cumberland School of Law were encouraged to look beyond themselves, to focus on serving others and to be persistent in pursuing their goals during the law school’s commencement ceremony May 13.

Terry McCarthy, adjunct professor and partner at Lightfoot, Franklin & White LLC was chosen by the Class of 2016 to deliver its commencement address.

“I just love a good story,” McCarthy began, “so I’m going to share three stories with you that have inspired me and changed my life.”

The first story was about Afleet Alex, a race horse that won the Preakness Stakes, Belmont Stakes and very nearly won the Kentucky Derby. More importantly, though, Afleet Alex’s owners helped to raise millions of dollars for pediatric cancer research by using Afleet Alex’s spotlight to vault one little girl’s cause to the national stage.

“Alex Scott, who unfortunately died of cancer in August 2004, was no ordinary little girl,” McCarthy explained. “Back when she was a 4-year-old in the hospital, she told her mother she wanted to start a lemonade stand to help raise money for other kids with cancer. In Alex’s dark times, she was not thinking of herself. She was thinking of how she could help others.”

By the time of Alex’s death in 2004, she had raised more than $1 million for pediatric cancer research. After her death, Alex’s parents received a phone call from the owner of a racehorse sharing the same name. According to McCarthy, “The owner simply said: ‘We own a horse that is pretty good, and we have been donating anonymously to Alex’s cause. Would it be ok if we go public with this? And Alex’s dad said, ‘sure.’”

Soon thereafter, Alex’s lemonade stands were assembled at racetracks across the country, and her cause was picked up by national media outlets. Alex’s efforts eventually became a foundation that has raised more than $120 million for childhood cancer research, “all because of the vision of one 4-year-old girl, the courage of her parents and the determination of a horse who shared her name,” exclaimed McCarthy.

The second story was about McCarthy’s friend and colleague, Jere White, who died of cancer in October 2011 at age 56. White was a Cumberland School of Law graduate and founding partner of Lightfoot, Franklin & White LLC. “He was also the greatest trial lawyer I have ever seen,” added McCarthy, “and one of the finest people I have ever met.”

Prior to his death, White established the Jere F. White Jr. Fellowship Program at Cumberland School of Law, which is awarded to one entering student per year. The first recipient of the prestigious fellowship, Caroline Collins Muse, is a 2016 graduate of the law school and was in the audience. Also in the audience was 2016 graduate J. D. Marsh, whose father, David Marsh, was on the opposite side of White in many big cases.

“Jere and David fought hard against each other in the courtroom,” explained McCarthy, “but they didn’t hate each other. In fact, they were great friends. David has given as much as anyone to help make the Jere White Fellowship great.”

McCarthy said he wanted the graduates to take three things from Jere White’s story:  “First, the law is an adversarial profession, but you can still like and even love your opponent and reach the top at the same time. Second, like little Alex, in his last days, Jere White thought of ways to help others, including students at Cumberland. I challenge you to start today, and think of ways you can give back to Cumberland and to others. Third, legend has it that Jere lost his first six jury trials. Like Alex, he didn’t give up. He picked himself up, and I can assure you he didn’t lose many after that.”

The third story was the story of the Class of 2016. McCarthy began by stating, “Lawyers need to laugh more.” He then recounted several humorous tidbits of personal information his students had written down on notecards during their first day of class, including “I once got run over by a golf cart,” and “My great (eight times removed) uncle is George Washington.” He then teased the class valedictorian, J. D. Marsh, for misspelling a word on his notecard.

“All teasing aside,” McCarthy continued, “this graduating class includes brilliant litigators, gifted athletes, individuals committed to serving the community, and a group that has survived ‘snowmageddon’ and celebrated ‘Rascal.’ Most importantly, though, you have formed a bond that will last for years to come.

“Dr. Seuss once said: ‘Sometimes you will never know the value of a moment until it becomes a memory,’ but I valued my time with you every single day,” reminisced McCarthy. “I am proud to have been a small part of your story. From the bottom of my heart, thank you for changing my life for the better. This chapter in your story is about to be over, but I can’t wait to see what this class does as the rest of the story unfolds.”