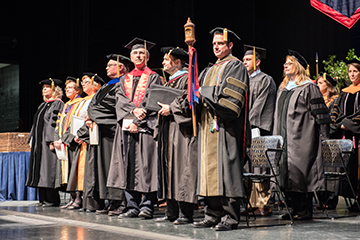 The commencement ceremony featured student speakers from each of the four schools who spoke on the theme of calling and how it has impacted their lives.

“Today, I stand here to make a confession. When I began this program, I started with only one goal in sight and that was to stand here today to receive my degree,” said Nathan Ewell, a Master of Science in Nursing, Educator, graduate from Ida Moffett School of Nursing.

A calling can be difficult to find when the goal of one’s education is to simply earn another credential at the end of his or her name, he said. “I saw this degree as a means to an end. Little did I know that so many of you would get in my way.”

Ewell credited the passion of Samford faculty and the encouragement of his peers for opening his eyes to a calling to care, something his fellow speakers related to.

Jordan Webb, a Master of Science in Speech Language Pathology graduate from the School of Health Professions, recalled a specific moment during her time as an undergraduate student at Samford when a professor gave her a book, Life of the Beloved by Henri Nouwen, that challenged the way she conceptualized calling and caused a paradigm shift in her heart and mind.

“I was reminded that I am not the main character of this story,” Webb said. “The call on my life is to be a servant of all, to love the least of these. In a world where people use their education and position to further their own kingdom and status . . . we are called to emulate a savior who became nothing, taking on the form of a servant.”

As a student in the School of Public Health, Amanda Gillespie, a Master of Public Health graduate, said that in pursuing her degree, she has expanded her calling, developing skills, knowledge and confidence as a health care professional that will translate into a greater impact.

“I believe my calling is motivating people to move beyond their present limitations to help them reach their full potential. I believe I am called to set an example of making a difference in the community through the expressed love of God,” Gillespie said.

Finally, Zach Burns, a Doctor of Pharmacy graduate from McWhorter School of Pharmacy, encouraged his peers to think about how one’s actions can make a lasting impact.

“As I thought back on those that have impacted my life, one person continues to come to mind: Dr. Gary Bumgarner,” Burns said.

Bumgarner taught at Samford for 15 years before his death in the fall of 2016. He was a beloved pharmacy professor and colleague who “had that unique ability to make you feel like the most important person in the room,” Burns said.

“Thus, to the graduating class of 2017,” he said, “my challenge to you is simple: Who will go out and be the Dr. Bumgarner in their community, at their job or in their family? Who will be eager to do their job, passionate about those they serve, and possess a resolute mind-set that transcends all barriers and all obstacles? It is my deepest desire that we, as the class of 2017, carry on the legacy of Dr. Bumgarner as we live out our calling to serve.”