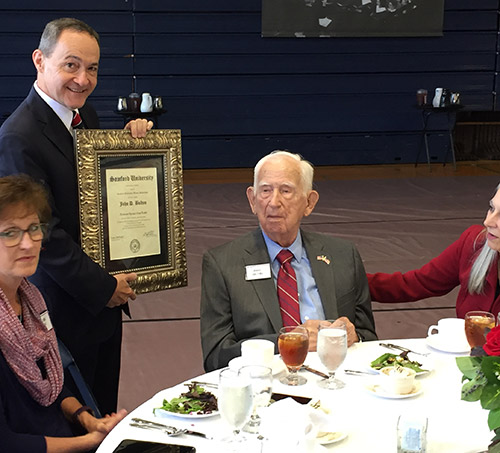 Samford University’s heritage was evident during homecoming weekend and especially at a gathering for alumni who graduated at least 50 years ago and their visiting guests. On Saturday, Nov. 11, Samford hosted nearly 80 attendees at the annual Golden Bulldog Luncheon.

The group shared memories of their Howard College / Samford University experiences and celebrated several award presentations. Historical photographs and other memorabilia were displayed throughout the room for them to view.

“The great legacy that Rev. Bolton and his late wife left behind is a family that is literally serving the Lord here locally, throughout the United States and honestly to the uttermost parts of the world through some of his grandchildren,” Pittman said. “Congratulations, and thanks for being a Samford Bulldog for all these years.”

Pittman then presented two Belltower Awards, the first to Sigurd Bryan ’46. Bryan is professor emeritus of religion and remained active with the department beyond his retirement from teaching through the Samford Sunday program.

“Dr. Bryan was such a beloved professor for some many decades in the department of religion,” Pittman said. “He has served the Lord faithfully for all these years.”

The second Belltower Award went to C. Wayne Atcheson ’64, former sports information director of the University of Alabama who more recently served several years as the director of the Billy Graham Library in Charlotte, North Carolina.

“For all your years of service and loyalty to Samford since you graduated in 1964, we thank you and honor you today,” Pittman said.

Samford’s Director of Gift and Estate Planning Gene Howard distributed the David Lockmiller Awards to the male and female in attendance from the earliest graduation year. This year’s recipients were Bryan ’46 and Margaret Ann Miller Peterson ‘47, who each received an elegant, engraved clock.

Rachel Sinclair is a Samford University graduate and a freelance writer for the Division of Marketing and Communication.