At 92, Samford’s First Female SGA President Revisits Her Journey to the Office 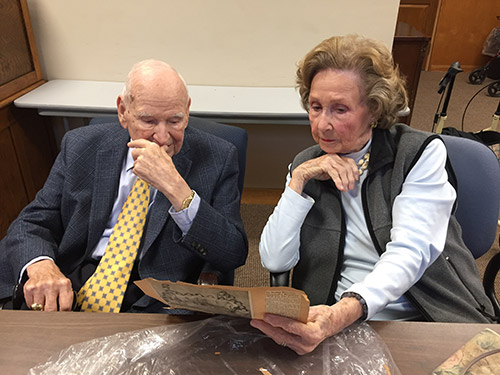 Davis and Peterson review the student newspaper story about the transition from Davis to Peterson as SGA president.

In 1946, Peterson campaigned for vice president alongside her high school friend, J.B. Davis, who was running for president. Now 92, Peterson and Davis returned to Samford for homecoming on Nov. 11 and met together to retell their fascinating story.

Peterson and Davis competed in a lively election campaign, which the student newspaper described as “one of the hottest campaign battles ever waged at a college.” Davis laughed as he recalled their creative promotion tactics, which at one point involved bringing a cow to campus to prove that their campaign was “no bull.” The pair were excited when they won the election.

At that time Davis was enrolled in the V-12 Navy College Training Program that was based on the college’s campus, and over the summer he learned that he was being transferred to Duke University. Therefore, Peterson became the first woman to assume the prestigious role of SGA president.

“I was really shocked,” Peterson said. “I hadn’t planned to do anything except help him! Then I had to get busy. We had a good committee.”

Peterson said she was not nervous about being the first female president. She led committee meetings once every two weeks, and under her leadership SGA developed a new program to help high school students learn more about Howard College.

“We formed a group called the Contact Committee, and the people would go to high schools and talk to the students to tell them about Howard,” Peterson said. All Howard students could volunteer even if they were not a member of SGA. Peterson said she even spoke about Howard to a high school in Florida when she was traveling with her family.

“At that time Howard was kind of small, and we just needed more students,” Peterson said. “It was fun.”

Davis and Peterson both said that one of their favorite parts about Howard was the kind and personable faculty. “I just loved them,” Peterson said. “They were all wonderful teachers. They knew you by name, and they were always willing to help you with anything.”

She said she is encouraged to see that friendly spirit on campus is still prominent today.

While Davis did not return to Howard as a student, he eventually moved back to Birmingham and lived within walking distance to the campus. “I grew up by [Howard], and as a child I skated there at Christmastime,” Davis said, “so it was kind of like home.”

Davis established a career as an industrial engineer, and later in life he worked in the real estate industry.

Peterson also stayed in the Birmingham area, where she and her husband raised their seven children. Several family members also attended Samford. “I’ve had a wonderful life, and I’m a very happy and healthy person,” Peterson concluded.

Rachel Sinclair is a Samford University graduate and a freelance writer for the Division of Marketing and Communication.