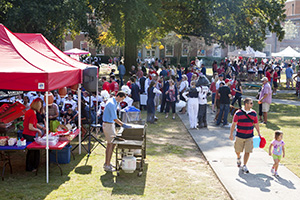 It was a perfect weekend to celebrate Samford University’s heritage as thousands returned to campus Nov. 9-12 for 2017 homecoming festivities. The fall beauty of the campus was everywhere as people were inspired by reunions with friends, presentations by alumni and faculty, renewal of traditions and, of course, football.

Daniel Temple ’07 of Hoover, Alabama, was attending his 10-year reunion. “There is just something special about Samford and the mission of the university in general,” Temple said. “It makes you appreciate it more when you leave for a while and then come back. Samford does a lot of things right.”

It was a full weekend of activities, with something for everyone. The celebration began on Thursday with the Bulldog Bash, a pep rally and concert on Ben Brown Plaza for students. Seniors Anna Rogers of Gainesville, Georgia, and Nelson Park of Birmingham were named homecoming queen and king. They also were presented, along with the homecoming court, at Saturday’s football game.

About 250 members of the board of trustees, board of overseers, advisory boards and other leadership groups gathered on Friday for a Leadership Forum.

Samford is one of a handful of universities “widely recognized for superior quality, large enough to offer a great breadth and depth of academic and student life programs, small enough to nourish rich relationships, and infused with the irrepressible hope found through Jesus Christ,” Samford President Andrew Westmoreland told the group.

There are plenty of universities with great records of the first three items, Westmoreland noted, but only a “handful with reasonable claims to all four.”

In addition to meetings of various leadership and advisory groups, several schools and departments hosted lectures and other presentations by faculty and alumni on Friday and Saturday.

An overflow crowd gathered Friday afternoon at the home of Samford President and Mrs. Westmoreland for a reunion of students and faculty who had lived and studied at Daniel House, Samford’s London Centre. The reunion was in connection with a special campaign to raise funds for renovating the facility.

“Who would I be had it not been for the Daniel House?” Stacia Sinclair Gaines ’87 asked the gathered crowd. “I realized I would be a very different person today.” Gaines was part of the first group to study at Daniel House in 1984.

Six Samford alumni were honored Friday evening at a banquet and awards presentation with the annual alumni awards.

Tailgating on the Quad was, by far, the most popular time of the day.

Samford alumnus and award-winning actor Tony Hale was one of many gathered at the Class of 1992 reunion tent. He graciously posed for photos and signed autographs.

Bill Nelson of Decatur, Alabama, also was at the 1992 reunion with his wife Amy Henderson Nelson ’96 and their family. “I was in the last group that lived in Crawford Johnson Hall before it became [Beeson Divinity School],” Nelson said. “Our kids don’t know the ‘Bill and Amy’ from when we were individuals. To be able to walk around campus and tell them stories is special.”

In a special presentation, representatives of the reunion classes presented Westmoreland with a check for $193,500 that was raised during a special Forever Samford campaign by the classes with five-year reunions in 2017.

Mary Beth Temple Smith ’79 of Huntsville, Alabama, summed it up best. “We’ve had a wonderful time at Samford today.”