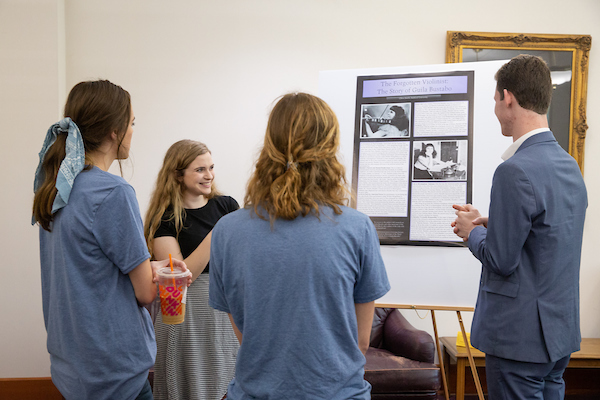 Chloe Smith—a University Fellows honor student and history and music double major–presented her research on The Forgotten Violinist: Giulia Bustabo. For her senior thesis in history, Smith explored the lives and careers of Bustabo and two other musicians who allowed their artistic ambitions to make them allies of the Third Reich. Smith focused on Bustabo for the research fair as “a case study of how to use music incorrectly.”

Smith said the Wisconsin-born prodigy presented a solo performance at Carnegie Hall in her early teens, then toured extensively in Europe in the 1930s. Bustabo remained in Nazi-occupied Paris, reveling in Nazi praise for her art and apparently oblivious to the horrors of the Second World War.

Smith suggested that Bustabo’s single-minded focus on her music may have been a manifestation of the bipolar disorder diagnosed when the musician joined the Alabama Philharmonic Orchestra in the late 1970s. But Smith also noted that the European conductors who were the other subjects of her research explained their Nazism as merely the means to their personal artistic ends. Their depositions for denazification hearings, Smith said, reveal that “they care more about the art than the people.”

Smith has earned a rare full graduate fellowship to Yale University and will continue her research in music history there starting this fall.

Junior journalism and mass communication major and sociology minor Hayley Joe Febrey combined her academic interests to examine Mass Media Representation of Diversity within the Church. For the project, she coded online images from almost 200 Southern Baptist and nondenominational “megachurches” representing every U.S. state to discern patterns in the way churches of 2,000 or more members send messages of racial, gender and age inclusiveness. “The Midwest had the most diversity, across the board,” Febrey said, possibly due to the presence of more of those nondenominational churches than in other regions. More than half of her sampled nondenominational churches send visual messages of racial diversity, she said.

Febrey found noticeable differences in how different denominations in different regions project inclusive values (or don’t,) but was most surprised to find that few churches in her sample display images of youth as churchgoers.

Febrey’s advisor for her project, Clay Carey, addresses sociological issues in his celebrated journalism scholarship. The junior might follow in that direction but also is considering graduate school in social work.

Senior University Fellows honor student and religion major Jonathan Punt presented his research on the Biblical book of Ecclesiastes, focusing specifically on the book’s contrasting tones of “frustrated cynicism” and “cheerful optimism.” He suggested that this structure might reveal the deliberate strategy of a single author, contrary to the scholarly consensus that later generations added to the book in an attempt to relieve a darker original tone.

Punt finds logic in an original text that contained both despair and hope, “written by one mind.”

“I do think there is value in having nihilistic texts in the Bible, because some things you read to learn from, some things you read to know you’re not alone,” Punt said. “It can create space in the faith community for people who currently can’t find any meaning or enjoyment or lasting purpose.” He suggested that the hope of relationship with God gives additional meaning to the acknowledgement of suffering.

Punt compared Ecclesiastes to the recent rescue of young soccer players from a flooded cave in Thailand. A rescuer, in the form of the book’s author, acknowledges the reality of readers who feel trapped in despair, but doesn’t try to merely “encourage their way out” or leave them to their fate. Rather, the author “grabs them by the hand and shows them places of meaning to start leading them out to a place where their relationship with God is restored.”

Punt will serve as a full-time youth minister until he begins graduate study at Duke University Divinity School in the fall of 2020.

Hynds said she is excited to see increasing interest in undergraduate research at Samford, not only for the new information and perspectives the students introduce, but because of the long-term personal benefit to them. “It is a tremendous asset to the experience of our students and sets them up for success as they move forward into additional schooling or careers,” she said.

Claire Davis (advised by Randy Todd) The Instruments of Destiny: The Iliad and American WWI

Becca Weatherford (advised by Serena Simoni) Restorative Justice as a Means of Post-Civil War Reconciliation: The Cases of Rwanda and Argentina